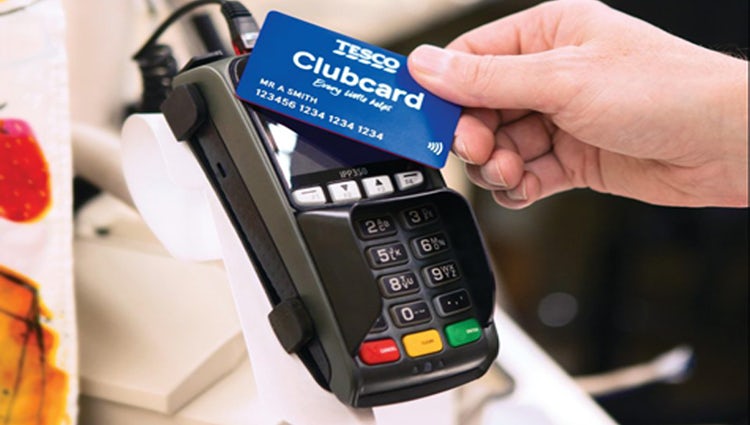 If you’re a Tesco Clubcard member then you’ve probably already received a shiny new card in the post.

Last week, the UK’s biggest supermarket started rolling out an updated version of its Clubcard, which now includes a contactless button so shoppers just tap at the checkout to add their points. It has also inked new partnerships with the likes of Uber. This means for every 50 Clubcard points – equivalent to a £50 shop – accumulated, shoppers can now opt to exchange them for £1.50 of Uber credit.

Tesco claims the new Clubcard is the “first large-scale contactless loyalty card in the UK” and that it will increase security for customers while providing the big four supermarket with “more actionable data”. However, when you compare these changes with the Clubcard plans Tesco unveiled back in March 2014, it all feels a little underwhelming.

Back then, former Tesco CEO Philip Clarke pledged an ambitious fully-digital loyalty programme – offering tailored, gamification-type, rewards such as shoppers being rewarded for eating a healthy diet – by the Autumn, which all sounded a lot like what M&S would go on to do with its own Sparks loyalty card. Subsequently, analysts predicted a “radical overhaul” was on the cards for Clubcard. What a difference three years makes.

“Tesco is just replacing the existing card with one that has a contactless button,” says an underwhelmed Jason De Winne, general manager at loyalty marketing firm ICLP. “You still have to do the same physical action of getting the card out and presenting it to a member of staff; now you just use contactless instead of a bar code. Hardly radical, is it?”

So why did Tesco halt its former Clubcard plans? De Winne believes it could be due to the challenge of overhauling the historic data legacy systems in place for Clubcard to something that’s more multi-channel.

Marketing Week, however, understands Tesco’s focus is on making Clubcard as simple as possible rather than adding too many complex new features. It believes its consumers currently see more value in Clubcard reaching 400 brand partners for rewards than rolling out a fully digital loyalty experience. Lewis is also keen to detach himself from any plans laid out by his predecessor Clarke, who was the CEO of Tesco during its least successful period.

Shoppers want a unified mobile-based shopping experience where they can scan, pay and access loyalty all in one place

Phil Blundell, the former CEO of Eagle Eye, which designs digital loyalty apps for the likes of Greggs, paints a slightly different picture. He explains: “Dave Lewis’s priorities are to get the cost base down and offer better prices to consumers.

“It’s hard for him to invest in loyalty right now as he’s dealing with price inflation and the rise of the discounters. Loyalty just isn’t the priority so keeping the Clubcard programme simple makes more business sense.”

Another reason could be the rise and rise of the German discounters. Despite both Aldi and Lidl having rapid expansion plans, neither has a traditional loyalty programme in place or any plans to create one. This is something that appeals to modern, price and time-savvy shoppers, who are looking for a simpler shopping experience devoid of the need to show multiple cards at checkout.

“A lot of the shopper and retailer sentiment has moved towards simplicity as both believe it can offer greater value,” explains Bryan Roberts, global insight director at TCC Global. “If I go into a Tesco superstore, I might have to decipher all the special offers then present a loyalty card and exchange vouchers for a day out at Chessington. At Aldi, you just walk in and out.”

But what if shoppers have just moved on from traditional loyalty programmes altogether? According to Nielsen data, 89% of Britons are currently a member of at least one loyalty scheme, ahead of the global average of two-thirds of shoppers and behind only Finland.

Yet, despite this, loyalty cards are much less likely to impact purchasing decisions in Britain. Nielsen also found just half (51%) of those surveyed would buy from a retailer with a scheme over one without, if all other factors were equal. That is the second lowest figure globally, ahead of just Denmark.

The conclusion from this data is that a brand standing for social purpose or providing great customer service could win a shopper’s loyalty in much more profound ways than a conventional plastic card. Roberts agrees with this sentiment.

“Perhaps Tesco aren’t investing as much into loyalty because they’ve realised that you no longer need a card to retain shoppers?” he asks. “TCC did a focus group earlier this year and shoppers told us that a retailer investing in the local community – much like Tesco’s famous Computer for Schools programme – is far more likely to win trust than loyalty points.”

And Roberts could have a point given Tesco’s recent marketing focus on sustainable initiatives such as tackling food waste.

The future for Clubcard

According to ICLP, traditional, points-based, loyalty programmes such as Tesco Clubcard do still work. Its recent survey of 1,000 shoppers found 59% would spend more time with a brand if they had one of these loyalty programme in place. Meanwhile, 37% of these shoppers agreed that Clubcard means they are more loyal towards Tesco than Aldi and Lidl, which don’t have an equivalent programme. Therefore, scrapping Clubcard altogether probably isn’t a good idea.

Instead, Roberts says it will only be a matter of time until Tesco updates Clubcard to something that’s more digitally-savvy. He explains: “They have the [mobile payments service] PayQwik, have trialled paperless receipts and the Clubcard mobile app is fairly solid if limited. Tesco is creating the seeds for something much bigger.

“Shoppers want a unified mobile-based shopping experience where they can scan, pay and access loyalty all in one place. It’s on the horizon. Lewis just has bigger fish to fry at this moment in time.”

However, Blundell believes any delays could ultimately be an oversight, with the likes of Amazon rapidly expanding into groceries.

He concludes: “Amazon is so successful because it has tonnes of data on consumers and has found a way with Amazon Prime to really reward the loyalty of these members digitally. Amazon might not be a big threat to Tesco right now, but it will be in five years time. The longer it waits to evolve Clubcard, the more susceptible Tesco leaves itself to disruption.”

The big four supermarket’s cost-cutting drive has seen it announce well over 2,000 job cuts over the past few weeks.