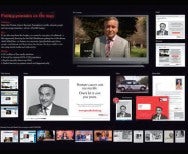 The Prostate Cancer Research Foundation was established to fund research, complementing the activities of other prostate cancer charities, but struggled to generate awareness.

Although it is the most common cancer faced by men, prostate cancer has traditionally received less funding and support than breast cancer, for example. The Bob campaign, created by integrated agency The Communications Agency, aimed for blanket coverage – not just to the men over 40 most likely to be affected by the disease, but to those who care about men, such as their wives, sisters, mothers and colleagues.

More publicity was generated on prostate cancer in one day than has ever been achieved. WH Smith agreed to put up posters and sell badges in every one of their 700 high street and travel stores. The media coverage continued a year on as the campaign generated huge amounts of free PR. All the creative resources and media space were donated. £3m worth of media value was created with a budget of less than £50,000, at no cost to the charity.

An estimated 83% of the UK population saw the campaign an average of four times and there was a 228% increase in the charity’s donor base, including a rise in the number of regularly monthly donors by 580%. Over £200,000 of donations were made as a direct result of the campaign.

Interactive marketing and media is here to stay but is your company making the most of it? The internet has changed the rules of marketing and it has changed customers and the techniques at your disposal to reach them. Marketers in the 21st century need to understand and be able to implement these changes in order to prosper.

For over twelve years, New Media Age has been explaining how interactive channels can be exploited and how they can work together with traditional methods. On a weekly basis we show how the UK’s top brands are developing their online marketing strategy, we explore the hot topics and give valuable and usable advice.

“NMA is my weekly hit. It gives me a sense of being on top of it all. You leave no digital stone unturned.”

The new relaunched New Media Age brings you exclusive news, informed analysis, thought-provoking commentary and detailed, indepth features, all drawing on our unrivalled experience in this area and that of our big name columnists. All of this is aimed at answering one fundamental question: how can interactive media improve my business?