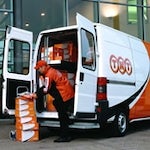 A third (33%) of people who make a donation are prompted to make that contribution by mail received from a charity in the post, according to a study by TNT Post.

The survey also found that direct mail is one of the most consistent channels for donation response rates with almost a fifth (17%) of people who have received an unaddressed direct mailer responding to the sender.

Over half (57%) of those who chose to respond to mail appeals have responded via post to make their donation.

The survey also found that almost half (47%) of Britons regularly contribute to a specific charitable cause and a quarter (25%) make a charitable donation on an adhoc basis each month.

The online survey polled 2,000 British adults. It was conducted for TNT Post by Vision Critical between the 7th and 9th of July this year.