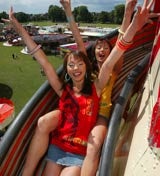 The Diary is a big fan of the Cheeky Girls and, indeed, all things “cheeky”, so it was a big disappointment not to see the glamorous Transylvanian twins occupying their rightful place a the top the Christmas charts last year.

But despite the dearth of festive cheekiness last Christmas, things are looking up in 2006. And it looks as if Monica and Gabriela could be facing some cheeky competition.

This month sees the launch of a new website that pledges to combine “gaming and cheekiness for great fun”.

CheekyMoon.com, which is “inspired by traditional British end-of-the-pier saucy humour”, offers big jackpots for players and even more tempting prizes including the services of CheekyButlers and CheekyMaids.

Offline events include poker tournaments and an intriguing-sounding NaughtyNetball tournament in which teams of male and female “CheekyMoonBabes” will be able to compete against each other.