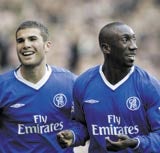 Chelsea Football Club is to withdraw from its &£20m, four-year sponsorship deal with airline Emirates at the end of its contract next year as the club prepares to launch a global brand initiative.

Insiders say the club is already in talks with potential replacements for the airline, with telecoms rivals Orange, Siemens and T-Mobile believed to front-runners for the deal.

The airline is understood to have been discouraged from renewing the contract by the high price that has been placed on the shirt deal by Chelsea. Reports suggest that Chelsea is looking for a deal worth at least &£20m-a-year, which the club will use as the cornerstone for a wider push to make the club a global brand.

Peter Kenyon, the club’s chief executive and former Manchester United chief executive, is said to want to emulate the success of his former club and Real Madrid in establishing lucrative overseas merchandising opportunities and television rights. The club has handed director Paul Smith responsibility for establishing it as a global sports brand.

Emirates airline has reviewed its advertising and media accounts over the past few months. The airline handed its &£4m ad account to Leagas Delaney last month (MW June 17). The company’s media account is still under review.