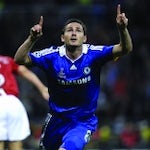 The GSK-owned drinks brand has been the official sports drink of the Premier League since its inception in 1992, and replaces PepsiCo’s Gatorade as Chelsea FC’s drink of choice.

The deal will run for the next three seasons band. Lucozade Sport scientists will also work closely with Chelsea’s backroom staff at the training ground in Cobham.

Ben Wells, Chelsea head of marketing, says: “Lucozade Sport is a natural fit for Chelsea as we aim for further honours this season. Working with Lucozade Sport means that our players have access to safe products that are proven to make a difference.”

GSK may soon do battle with rival PepsiCo’s Gatorade on a wider scale with plans to to launch Lucozade in US.

The FMCG company is said to be in advanced talks with a prospective distributor to introduce the drink the US.

The move will also pitch Lucozade against Coca Cola’s Powerade energy drink, which currently sponsors the football league in the UK.