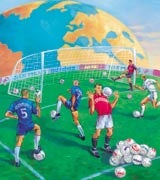 With the rumour mill linking Chelsea to football superstar David Beckham once more, Roman Abramovich’s millionaire army could be on the verge of signing a brand leader to help shape the club into a global franchise.

Chelsea has already proven itself to be ruthless in pursuit of the right associations for its developing brand. The club is unlikely to renew its sponsorship with airline Emirates, despite there being more than a year to run on the deal – an unheard move by a rights-holder in a difficult sponsorship market (MW last week).

This rejection has little to do with demands for more money, according to a source close to Chelsea, as Abramovich’s billions are already burning a hole in the pockets of incoming manager Jose Mourinho. Instead, he says, the club sees the shirt deal as one of the cornerstones of a wider push to create an exciting Chelsea brand and it wants a correspondingly “sexy” company to partner. FutureBrand vice- president Chris Nurko says: “Chelsea is trying to build a global brand that will mean something to people outside SW1 and SW3. One of the strands is to find a complementary shirt sponsor. The likes of Autoglass or Emirates were not very flattering to the team.”

It is no surprise Chelsea is seeking to emulate the relationship of Manchester United with shirt sponsor Vodafone. Chelsea chief executive Peter Kenyon was the marketing maestro of Manchester United, until he was poached by Abramovich last year, and it was Kenyon who helped oversee the Vodafone deal that will net Manchester United more than £70m in eight years. This money could be dwarfed by the potential in global cross-marketing deals and a 50/50 joint venture.

Chelsea has indeed a long way to go before it is a commercial powerhouse of Manchester United’s status. According to financial services company Deloitte, Chelsea was only the fourth most profitable football club in England for the season 2002/03, behind Manchester United, Arsenal and Newcastle United, and only the tenth most profitable worldwide (see box). It will be the difference between Chelsea’s annual commercial revenue of £31m to Man United’s £45m that Kenyon will be asked to narrow through sponsorships, merchandising and alternative revenue streams.

However, Chelsea will be more envious of the Lancashire club’s huge fan base than its profits. Man U has an estimated 53 million supporters worldwide and therefore the potential opportunity to convert this adoration into sales in the longer term.

Building this sort of fan base, says Cameron Day, new projects director at agency The Works, will take a lot longer than building a team. Day says Abramovich may be able to acquire some of the best players in the world but he cannot buy a team brand so easily.

Ben Wells, account director at agency Redmandarin, says Manchester United’s place at the head of football’s rich-list has come at a time when the team has enjoyed sustained success, with eight Premier League championships in 11 years.

More importantly, says Wells, the team has developed a football pedigree over the past 40 years, running from Sir Matt Busby and the players lost in the Munich air disaster to the winning sides of the past decade. “Manchester United, as with all the big clubs, has a heritage of winning. This is the brand, and is why people want to wear the shirts. Whereas Chelsea has won the league only once – and that was in 1955.”

Man United marketing director Peter Draper agrees the team brand has been helped by “great product”. “Our product – our football – has been strong. Our brand – the quality of our football – is the same across the world as good football is universally recognised. Our research and development – which is training players – has been consistent.”

Draper adds that the club’s marketing has been boosted by companies helping to promote the Manchester United brand around the world. He adds: “The big advantage we have is that someone usually pays for putting our brand on television and on their products, rather than the other way round.”

Nick Cloke, director of consultancy Catalyst, agrees that on-pitch success is key to the development of a football brand. But, he says, Chelsea will also need to attract more marketable players. “Buying players has nothing to do with football. It is all about marketing. Chelsea is not a global brand, but the club can attract players who are. They need a Wayne Rooney or Beckham, not an Arjen Robben or Joe Cole, and through marketing them they can tap into markets such as China,” he adds. 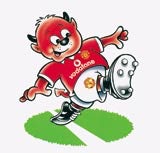 His words mirror those of Arturo Baldasano, who recently ran for the position of president of Real Madrid. Baldasano complained last month: “When Beckham came to Madrid last year it was not because of sport, it was for marketing reasons.”

With the right player marketing, says Tony Simpson, chief executive of marketing agency SP Active, Chelsea could build the right team brand. But first, he says, the team needs to decide exactly what its brand is. “Chelsea is only the second-best team in London and its Kings Road heritage no longer has any relevance, not in the rest of the UK, and certainly not in other countries.”

Alastair MacDonald, managing director of agency Connexus, believes Chelsea has an opportunity to create a brand around a premium positioning based on style and fashion, both on and off the pitch. “Real Madrid, Manchester United, AC Milan and Barcelona have developed as brands beyond football. If Chelsea can establish a reputation for style and fashion, this seed of an association could be developed into a global brand”

McDonald says that many people in the UK wear Real Madrid shirts because the team is perceived as stylish, not through loyalty to Beckham or Spanish football. He compares Chelsea’s potential to brands such as Marlboro and Dunhill, which have managed to create sales markets outside cigarettes, such as in fashion.

Chelsea’s Smith agrees the club’s brand will involve the perception of glamour. “We are based in the most affluent part of a capital city so the brand is stylish, cosmopolitan and exciting. These characteristics are the Chelsea DNA.”

Smith adds the lack of brand history at Chelsea is an advantage. He believes Chelsea has an almost blank slate to build an image that will resonate with fans across the world. “While Chelsea is almost 100-years old, we haven’t got the straitjacket of heritage of a club like Manchester United, so we can be more innovative in our marketing.”

But, as Blackburn Rovers found to its cost, there is no point developing revenue streams outside football unless the brand is well established first on the back of sustained on-pitch success. Cameron Day points to the failed launch of a range of Blackburn Rovers clothing in association with fashion label Red or Dead following the team’s single Premier League success. Blackburn simply did not have the stylish image needed for a fashion brand, Day says.

But Smith believes the fashion market is one of many areas the Chelsea brand can be leveraged. The club has already signed a deal with an unnamed clothing brand that will see a range of Chelsea-branded apparel in shops by the end of the year and the club is also pushing its brand into other territories. Smith says the US is the first target market with a forthcoming tour planned, bolstered by coaching sessions and soccer clinics. The club is poised to launch Chelsea TV internationally, as well as develop a global membership programme and websites in different languages. A glossy magazine will also be launched, which will be printed in multiple languages and sold in different markets.

However, Arsenal commercial director Adrian Ford sounds a warning to Chelsea. Ford says that teams must be able to walk commercially in the UK before they can run internationally. He adds that revenue outside the core domestic income generators of gate receipts and TV rights will always be a side interest for any club outside the top three in the world.

Arsenal is focused on developing its stadium at Ashburton Grove, which will allow an additional 22,000 fans to spend their Saturdays – and their money – watching Arsenal play. “We need to tap into the great demand to watch Arsenal play,” says Ford. “This is where money lies. We have decided our resources are better deployed in London than abroad.”

Ford adds the club will look at expanding into other territories in the longer term, although says there is only “limited scope to extend outside football” into areas such as financial services and fashion. He says: “As with any brand, there’s a limit to how far Arsenal can be stretched outside its core market.”

Andrew Lee, analyst for investment bank DRKW, agrees match-day income still dwarfs other sources of revenue. Lee says: “Things such as MU Finance will not have the same impact as the difference between Manchester United finishing third instead of first in the Premiership, which would immediately reduce United’s TV pool income by £5m in the 2004/05 season.”

Match-day revenue at Stamford Bridge seems certain to be boosted next season by the Chelsea’s involvement in the Champions League, and the team’s on-pitch success will be vital to how the brand performs off it.

But whether or not Abramovich wants the club to generate money is cause for speculation. Smith admits the question of whether its owner values Chelsea as a business or simply as a trophy has caused concern at Stamford Bridge.

Smith says: “It has been a strong topic of conversation for us over recent months. But we will develop Chelsea as a sustainable brand that does not need to rely on Abramovich’s considerable largesse. And this brand will be about winning, with style, of course.”