Luxury fashion brand Burberry, which claims a “distinctive British sensibility”, is facing a growing backlash over plans to move production from Wales to China, with the loss of 300 local jobs.

As consternation mounts, Burberry has been forced to justify its plans to a parliamentary committee of MPs, faces losing its Royal Warrant and has even been lambasted by the Church of England, which has invested £2.5m in shares in the brand.

Meanwhile, actress Emma Thompson is the latest celebrity to wade into the debate, saying the brand would be perceived as inauthentic should production move to Asia. She joins the likes of Welsh actor Rhys Ifans, as well as Hornblower star Ioan Gruffudd and actress Rachel Weisz – stars of recent Burberry campaigns.

As the furore unfolds, the brand is also facing criticism for the timing of a multi-million-pound ad campaign for Burberry Prorsum featuring the children of rock stars and actors, dubbed the “rockocracy”. They include Otis and Isaac Ferry, sons of Bryan; Sam Branson, son of Richard; and Jesse Wood, son of Ronnie, alongside infamous model Kate Moss. The company has been condemned for its employee Christmas bonus – a £30 Burberry voucher – which many observers dubbed tactless.

The move to China, announced late last year, is for economic reasons, according to Burberry, which will retain its Yorkshire factory. Yet the company is faring well. It reported an 11% rise in half-year sales with pre-tax profits of £84m at the end of last year. One source says: “It’s a sensible move now that it has shareholders to consider.”

This recent success, however, comes on the back of a bumpy ride for the brand, which last year celebrated its 150th anniversary. Established in 1856 by Thomas Burberry, inventor of the gabardine raincoat that was to become the company’s signature product, it was bought by GUS in 1955 and later demerged from the catalogue company in 2005. 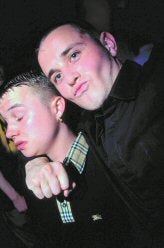 Burberry’s reputation has been tarnished by its association with “chav culture”. The brand’s signature Burberry check has become synonymous with football hooligans, while the media ridiculed actress Daniella Westbrook when she and her daughter were pictured wearing Burberry check from head to toe. The company has since discontinued many lines, including baseball caps.

Yet one source says: “I wouldn’t say that the brand has really suffered. The same happened with Ralph Lauren but that did not affect it. Burberry Prorsum is its high-end fashion brand and will not worry about association with the likes of Westbrook.”

Elliot Moss, managing director of Leagas Delaney, which has several luxury brands on its client list, disagrees. He says: “The brand has been devalued dramatically recently because of the chav element. I would even go so far as to say Burberry is dead in the domestic luxury market.”

The association saw the brand experience rocky times as profits dipped in 2005. In the same year, the company announced that chief executive Rose Marie Bravo was to be replaced by Angela Ahrendts, former president of Donna Karan International. Bravo had been credited with bringing Kate Moss on board and breathing new life into the brand, but this too was called into question when Moss faced drug-taking allegations. The brand considered dumping Moss but decided to weather the storm.

Jerome O’Regan, buying director at Red Media, which specialises in luxury goods marketing and counts Aquascutum among its clients, says the luxury market is to some extent protected from downturns in economic climate as customers tend not to have such concerns. “There is a disproportionate amount of spend on fashion brands, whatever the income of consumers,” he adds. “Some brands remain in favour among high-end consumers whatever the connotations among a wider audience.”

Another observer believes that, while Burberry has been damaged at home by its decision to move some production to China, its overseas reputation remains “fantastically strong”. And it is in these markets that the brand’s growth potential is greatest.

Leagas Delaney’s Moss says that Burberry has lost its cachet in the UK. He agrees there is potential in Asia but adds: “In Japan there is scope as consumers want a slice of British haute couture, but that is only among young consumers.”

He believes that Burberry’s problems at home are the result of its own policies. “For luxury brands it is a fine balancing act – the minute a luxury brand becomes accessible to the mass market it is devalued,” he says. “It eroded itself by becoming synonymous with chav culture. It’s about pricing and distribution. Advertising won’t be able to fix it. It’s all about the desirability.”

Moss argues that the latest campaign is irrelevant and old-fashioned. “The brand is standing still and has failed to fix its poor positioning,” he continues. “It needs to bring in new designers, revitalise the portfolio and charge high prices. Competition is increasing in the sector, especially in the area of accessories, with luxury houses such as Chanel and Louis Vuitton moving into the broader market.

It seems that, while profits are up, negative connotations surrounding the brand are likely to affect future performance. Moss is unequivocal in his solution: “The board should milk the brand, flog it and get as much as it can for the company.”

Marketers’ salaries rose by 12% in 2006 after several years of lacklustre growth, but life in the nation’s marketing departments is changing as middle-ranking managers exert more influence and conditions and perks mirror those across the Atlantic. By Hilary Hoolahan and David Reed.

Struggling roadside restaurant chain Little Chef was rescued last week just a day after calling in the administrators, but its latest white knight, turnaround specialist RCapital, will surely be its last. After years of turmoil, this looks like the final throw of the dice for one of Britain’s most iconic brands. RCapital is thought to […]