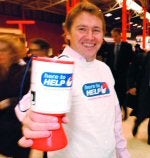 Clemmow Hornby Inge (CHI) is understood to be close to agreeing a deal to sell a 49% stake of the business to French holding company Havas.

Industry sources say the deal is expected to be finalised “imminently”.

It follows mounting speculation over a likely sale of CHI after it was revealed it had entered into talks with the global marketing services company in November last year. Havas’ agencies include Euro RSCG Worldwide and Arnold Worldwide Partners, as well as media network Media Planning Group.

CHI group chief executive Nick Howarth denies the agency is close to signing a deal but does not rule out the possibility of a partial sale.

“We’re not against the idea of selling a stake in the agency to a partner that can help our growth,” says Howarth. “But there is a huge difference between that and actually doing a deal.”

Havas last week posted a 0.8% increase in 2006 annual revenues to €1.47bn (£970m), with growth in the UK market at its highest level in five years. Despite the slight overall improved performance, fourth-quarter revenue slipped 1.8% on the previous year to €410m (£271m).

The company is chaired by corporate raider Vincent Bolloré, who has attempted on several occasions to gain board representation on media group Aegis, a company in which he holds a 29% stake.

Havas was unavailable for comment as Marketing Week went to press.

Npower is turning the screw on rival energy supplier British Gas by stealing an old British Gas icon for itself. RWE-owned npower is preparing to roll out a campaign featuring Sid – the faceless icon who was core to the Government’s campaign advertising the state-owned utility’s privatisation in the late 1980s. Filming on the first […]

Publicis, the UK’s fourth-biggest advertising agency, has suffered a triple blow in recent months with the losses of the Asda, Post Office and MFI accounts. These three losses – with a combined spend of some £90m – wipe out nearly one-third of the agency’s £283m billings and threaten to catapult it from the list of […]

Opportunities for brands in the developing world are increasing but local companies are using cultural knowledge to get there fast.