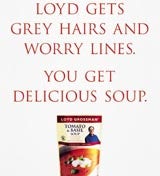 Food brand Loyd Grossman is reviewing its £6m advertising business out of Clemmow Hornby Inge (CHI), after the agency failed to come up with a suitable advertising idea for the brand.

The review is being handled by the AAR, and the resulting creative ideas will form part of a new initiative that is being planned for the brand this year.

Loyd Grossman, owned by Premier Foods, has expanded beyond its core range of Italian cooking sauces to include Thai sauces, salad dressings and olive oil, and it is expected to continue with this strategy.

Loyd Grossman brand manager Andrew Elder says it is developing a new communications strategy for the brand but declined to comment on its agency arrangements.

CHI, which will be repitching for the business, won a place on the Premier Food roster in December 2001 after winning the Loyd Grossman account. CHI handles other Premier brands, including Typhoo tea, Smash instant mashed potato and HP canned foods.

Premier Foods is owned by Texan venture capitalist Hicks, Muse, Tate &amp; Furst, which recently bought Weetabix. The bulk of the products in the Premier portfolio, which includes Crosse &amp; Blackwell and Hartley’s jam, was acquired from Hillsdown Holdings in 1999 and NestlÃ©’s ambient food business in 2002.