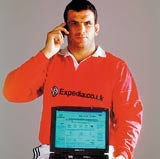 It is understood that Expedia plans to launch a TV campaign in March.

The review has not affected the online travel portal’s other agencies, which include online advertising agency Arnold Interactive and Media Planning Group.

Other recent account wins for CHI include RBS Advanta, the credit card division of the Royal Bank of Scotland, in December; Ocean Village, the P&O Princess cruise venture, in August; and supermarket Safeway in July (MW July 18, 2002).