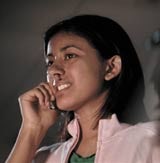 Charity ChildLine has launched what it claims is the UK’s first viral campaign designed as a fundraising initiative.

The minute-long advertising film has been created on a pro bono basis by Quiet Storm creatives Lee &amp; Dan, who are well known for their controversial viral work. ChildLine appointed the agency in March this year.

The execution, titled “We hear scared people”, is designed to highlight the work of, and raise money for, the ChildLine night service that is facing the axe because of financial problems. Viewers are asked to make an online donation and forward the Web link to others.

The charity initially planned to run the ad on television and in cinemas, but a shortage of funds meant it was unable to afford the spots so it decided to release the ad, approved by the BACC, virally. Matt Parkes, head of marketing at the charity, says he still wants to show the ad on other media and is on the look-out for sponsors and media companies prepared to help with the costs of screening the ads.

ChildLine launched its night service appeal late last month after experiencing a downturn in donations in the wake of high-profile charity appeals for other causes such as the Asian tsunami. It says it will be forced to drop its 24-hour service unless more money can be raised.