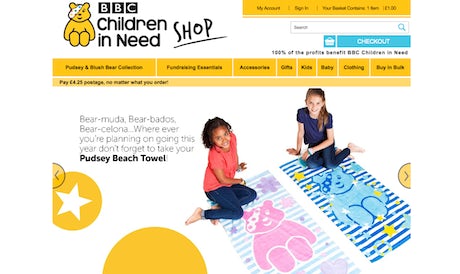 The ecommerce push will see Children In Need sell both themed merchandise and products such as backpacks and lunch boxes, as well as gifts, through www.childreninneedshop.co.uk. All the profits from anything purchased through the site will go straight to the charity and its work in making a difference to the lives of children in the UK.

Children In Need has previously sold its merchandise through eBay and corporate partners including Asda, Boots and Debenhams. However, marketing director Sarah Monteith says the charity identified an opportunity to boost donations by launching its own site.

She says while Children In Need has done “really well” in terms of selling merchandise it hopes to move that on with its own offering that it hopes will “grow massively” over the next few years. It will also help Children In Need as it looks to engage with customers and boost donations outside the annual telethon, which this year takes place on 14 November.

“Our corporate partners are hugely important as a channel to sell but based on that success we knew there was appetite for more. This is the first step on that journey,” she

This year’s telethon is being supported by a marketing campaign that will recreate celebrities including Helena Bonham Carter and Paul Hollywood as animated superheroes. Created by Red Bee Media, the aim is to get supporters to sign up to different fundraising activities.

For example Bonham Carter will be #captaincostume and look to galvanise those interested in fancy dress while Hollywood will be #thebaker and drum up support for bake sales.

Children In Need is launching its first digital hub where people can sign up to a particular “tribe”. They will then receive communications based on their choice and be able to see how many others have joined and how much they have raised.

“This campaign allows us to create teams out of the most popular fundraising activities. We are still talking to a massive group of fundraisers but through this we can give everyone a ‘team leader’ and feed our communications through that. That sense of participation brings the most engagement,” she says.

Children In Need is also looking to up its engagement with children this year following a tie-up with Lloyds Banking Group. That deal will see the charity bring a “supercharged” offer to children that will be more about communicating where their money goes and how it is used, than just about raising money.