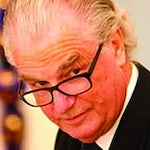 The group says it has won 658 pitches representing £19.4m of new business during the period adding Roche, Unilever and Nintendo to its client list. Chime claims this reflects the best first-half new business performance in the company’s history.

The group says it is “confident” about the full year and plans to more than double profits within the next four years.

Its PR business Pelham Bell Pottinger increased is revenue by 5% and operating profit was up 17%.

While revenue at its marketing and advertising business grew 17%, its profits suffered (down 14%) as the group increased its resources and digital capabilities to handle new business wins.

Lord Bell, chairman of Chime Communications, says: “Chime is the success story of the marcoms industry over the last few years.

“All this while the economies of the UK and developed world have suffered the credit crunch, the recession, the Euro crisis and many other problems; and the marcoms sector declined with the vast majority of our competitors reporting a fall in profits. We are delighted with the group’s performance and are confident the success story will continue for the full year and beyond.”

Earlier this week, WPP, the world’s largest advertising company and owner of JWT, Grey and Ogilvy Advertising, reported a 2.5% increase in first-half revenue as advertisers in the US and UK increased spending.