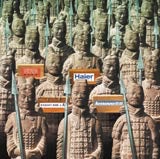 Western companies face brand death as China develops an army of its own brands, which can be sold at lower prices around the world. That was the stark warning issued by marketing guru Philip Kotler at last month’s Marketing Forum.

While some might dismiss this as an attempt to make a shocking wake-up call to what Kotler sees as a complacent and insufficiently professional marketing industry, it is clear that China is not satisfied with merely having “Made in China” stamped on its manufactured output, and that it wants to build its own global brands. As Interbrand chairman Rita Clifton notes: “He who owns the brand owns the wealth.”

In late 2000, Wu Bangguo, chairman of the National People’s Congress of the People’s Republic of China, gave notice that the development of brands was essential for the nation’s continued growth.

With the 2008 Olympics to be held in Beijing, China has the perfect platform to fulfil that quest, both through an upsurge in nationalism that will bolster Chinese brands in their home market and as a showcase of those brands to the world.

The argument put forward by Kotler and many others is that China is set to follow the pattern of its neighbours Japan and Korea, which started off producing their own brands at low cost and then slowly established them as global players. On this precedent, we will soon be desiring – and buying – the Chinese equivalents of Sony and Samsung.

Certainly, the demographics are on China’s side, with a population of 1.3 billion ready to manufacture products at an eye-watering price advantage over much of the world. StÃ©phane Garelli, professor at IMD Business School Lausanne, mirrors Kotler’s warning. He told delegates at the Marketing Forum that the size of the Chinese market means that it is imperative for the survival of many global brands that they have a presence in China, as well as in other emerging markets such as Russia, India and Nigeria.

And for the time being, those global brands have the marketing advantage. Euro RSCG Hong Kong executive vice-president for Grand China Antony Chow says: “A lot of Chinese companies still have not truly grasped the art of marketing and brand-building in the Western sense of the word. They are aware of the necessity, but not of how to do it.”

At present, there is only one indisputable Chinese global brand – Tsingtao beer, a brand built on familiarity garnered by visits to Chinese restaurants throughout the world.

But several other Chinese brands are waiting in the wings, ready to tread the international stage. The two companies most often cited as global pretenders are China’s largest PC manufacturer, Legend – which is partially state-owned and has just rebranded as Lenovo as part of a worldwide brand push – and domestic appliances giant Haier.

Apart from being the largest producer of white goods in China, Haier is also the fifth-biggest by market share worldwide. But it has ambitions to grow yet further, or as one of the company’s communications has it: “Haier and higher”.

All the fridges in China

Haier does not try to hide its Chinese origins, despite its German sounding name – an abbreviation of Lieberhaier, the German company that prior to the Chinese Revolution built the factory out of which Haier now operates. The company’s website opens with an excursus on an ancient Chinese proverb, “Infinity is a square without corners”, in a subliminal link with the square domestic appliances it markets.

Haier has begun to produce goods outside China, and has a factory and design centre in Italy concentrating on the European market – eschewing the cost advantages of Chinese labour. It has signalled its intention to begin European brand advertising, and has already begun to build brand recognition with a variety of sports sponsorships, including Italian football club AC Milan and British snooker player Stephen Lee.

Other Chinese brands have started to dip their toes into the sponsorship market, such as the partially state-owned telecoms company Kejian. While at present, Kejian is solely a domestic Chinese brand, albeit one with global ambition, it has already begun to build brand awareness, through its sponsorship of Everton Football Club’s shirts. Everton accepts that, for the time being, the sponsorship has more to do with the 93 million people who watch the Premiership in China every week.

In the UK, Chinese products are typically rebranded for sale. Electrical retailer Comet, for instance, sells Chinese white goods manufactured by Naiko as value products under its own Proline brand.

The situation is similar with musical instruments, another sector where China is increasingly dominant as a manufacturer. Chinese pianos now account for 20 per cent of new pianos sold in the UK, according to Richard Webb, managing director of Intermusic, the largest importer of musical instruments in the UK. He is a distributor for Pearl River, China’s principal piano brand, but the instruments are rebadged as Steinbach or Waldstein for the UK market. “People are not terribly keen on having Pearl River on their piano – they prefer something German-sounding,” he says.

Given the enormous geographical and retail challenges within China itself, commentators point out that many Chinese companies have yet to establish themselves at home, let alone as international brands. They are making progress though: while Volkswagen, for instance, is still the dominant car brand in China, Chow says there is no longer an inbuilt bias towards foreign brands. “A lot of local consumers regard domestic brands as equal in quality,” he says.

And not all observers are bullish about China’s ability to achieve its global brand ambitions. One of these is J Walter Thompson chief executive for Greater China Tom Doctoroff, who is based in Shanghai. He says that a combination of rigid “Confucian” management structures, Communist Party interference and a lack of long-term thinking, means that China is a very long way from developing a Sony or Coca-Cola of its own.

Doctoroff is also suspicious of using Japan as a precedent, pointing out the wide cultural differences between the two. The Japanese, he says, achieved their success through product innovation rather than bought-in marketing. “China is not an innovator, it just does things on a large scale,” he says. Those Chinese companies that do succeed, he suggests, will be the smaller ones that nobody has yet heard of, and which are unshackled by bureaucracy.

While critical of Chinese companies’ understanding of marketing, Doctoroff says it would be a mistake to assume that the Chinese, who for so long have lived in a radically different socio-economic structure to that in the West, are less receptive to brands than the sophisticated consumers of the capitalist world. “For many Chinese, brands are one of the few means of self-expression possible,” he says.

But even a sceptic like Doctoroff accepts that it is only a matter of time before the Chinese develop global brands. He already sees signs of an increasing understanding of the importance of marketing. “Nowadays, 35 per cent of our business comes from local brands – three years ago, it was none,” he says. There are 80,000 advertising agencies in China, he adds, although he maintains that most of the work is piecemeal and of very poor quality.

The Chinese government is already making moves to impose standards and to clean up advertising through increased regulation. Last week, it introduced time restrictions on the TV advertising of certain products such as haemorrhoid creams and women’s sanitary products, which are seen as distasteful.

To succeed as global brands, Chinese companies have to overcome two major challenges. The first is the double-edged sword of the “Made in China” tag, that is synonymous not only with low-cost products, but also with cheapness and a lack of quality.

Clifton says it is possible to build brands on a budget proposition (the low-cost airlines are a good example) but not if they are marketed purely on price. “Hardly anyone buys on price alone, and the danger is that another company comes along with a cheaper offer,” she says.

The other problem is that China conjures up a variety of conflicting associations in the West. While in past centuries, Chinese products were the height of exotic luxury (the cult of Chinoiserie) and of the most rarefied quality (the very word “china” now means quality porcelain), current associations are not only of downmarket products, but are tainted with the memory of political events such as the Tiananmen Square massacre. “China as a brand has a lot to do before it can use Chinese names,” Clifton says.

In the run-up to the Olympics, China is trying to grasp this nettle, repositioning its brand with the slogan “New Beijing, Great Olympics”. The Olympics marketing plan, unfurled by Wu Bangguo in August, sets out two criteria for potential Chinese sponsors – that they produce traditional artefacts, or that they propagate the message that “Made in China = high quality”.

But again, there are sceptics. Doctoroff believes that the Olympics will be too expensive for Chinese companies. And David Kilburn, an expert on marketing in the Far East, says: “Sponsorship is just about name awareness, not building brand equity. It is unfair to expect that global brands will emerge soon after the Olympics.”

Zenith Optimedia UK chief executive Anthony Young is optimistic about the short-term prospects, however. He says the marketing and branding deficit of Chinese companies can easily be remedied, as the Korean example of Samsung proves. “Any sort of company can turn up the volume quite quickly,” he says.

FutureBrand strategy director Jasmine Montgomery agrees, saying: “China, if it is smart, can leapfrog other countries.” She says it will be interesting to see how it reinvents itself and suggests that it could benefit from exploiting areas such as alternative medicine and interior design, where its image is already very strong.

Chinese companies may or may not manage to master the intricacies of Western-style marketing in the near future. But their sheer manufacturing muscle, coupled with a vast domestic market, newly enthused with patriotism by a showpiece Olympic Games – and possibly, in the near future, the launch of China’s first manned spacecraft – will ensure that Chinese brands continue to seep into the Western mainstream. And although it may be a long march, it would be foolish to bet against China as a future global brand powerhouse.