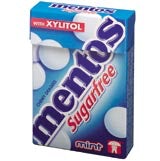 Chupa Chups Perfetti van Melle is relaunching the Mentos brand and introducing what it claims is the first sugar-free chewy mint later this month. It is the confectionery company’s biggest launch of the year.

The brand, which is the world’s second biggest confectionery brand, is going to be supported by a significant launch campaign, which will include television.

It is not known which agency has created the campaign but in the past Chupa Chups has worked with Barcelona-based agency Tandem.

The sugar-free variant contains Xylitol, which is believed to be good for teeth, and will be available in two flavours. The range will be packaged in boxes with a flip top lid and will cost 59p. The original roll packs will cost 35p.

The Mentos brand has been available in the UK market but has it has not previously received significant marketing support. In 2002, Bartle Bogle Hegarty won the &£15m pan-European advertising for the brand. The agency had a brief to create a new communications strategy.

The marketing responsibilities for the full portfolio of brands, which includes Fruitella and Cremosa lollies, was given to Chupa Chups marketing director Mark Stangroom (MW March 3, 2005).

Chupa Chups has been focusing on developing a range of better-for-you products such as Cuore di Frutta, a low-calorie lolly that contains added vitamin C, and Cremosa, which contains Xylitol.