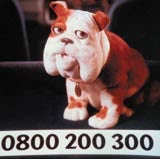 Churchill Insurance marketing director Nigel Bruce is leaving the company after less than a year in the post.

His departure follows that of executive director for sales and marketing Andrew Blowers, who left the Royal Bank of Scotland (RBS)-owned company in September by mutual agreement. It is not known if Blowers has a job. It is understood that Bruce is to take a position abroad outside the company.

Churchill, which incorporates both Churchill Insurance and Direct Line, is undergoing a major restructure and review of its business. An RBS Insurance spokeswoman was unable to confirm whether its agencies will be affected, but it is expected that Churchill Insurance’s &£12.6m media buying account will move from Carat to MediaCom to join the rest of RBS’s brands (MW June 19).

The sale of Churchill Insurance for &£1.1bn to RBS was announced in June but only confirmed on September 2. Churchill Insurance was founded in 1988 by Martin Long, with backing from Winterthur, before being sold to Prudential and then Credit Suisse.

Churchill’s nodding bulldog and Direct Line’s red telephone have made the brands the most distinctive in their market. Merged with RBS Insurance, the business is the third-largest insurer in the UK after Norwich Union and Royal &amp; SunAlliance.

Independent News & Media is to roll out its compact-sized version of The Independent to the Meridian television region from November 10. The newspaper, trialled in London during the past month, launched in the Granada region last week.