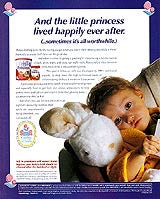 CIA’s brief is to launch a multimedia campaign this summer for Progress, SMA’s “follow-on” milk for babies over nine months old. The creative account is held by Euro RSCG Healthcare and is not being reviewed.

SMA Nutrition marketing manager Simon Shneerson says: “In the review of media, we were looking for improved ways of working and getting more value from our marketing budget.”

SMA is a subsidiary of US pharmaceutical company American Home Products (AHP), parent of another CIA client, Whitehall Laboratories. CIA was appointed after Shneerson spoke to other AHP roster agencies, including Optimedia. CIA handles Whitehall’s analgesic brands Anadin and Advil. Optimedia works on the nutritional additives Centrum and Caltrate.

Shneerson claims Progress has a fifty per cent share of the follow-on milk market, ahead of rivals Cow &amp; Gate Step Up and Farley/Heinz.

But it is a complex market. Promotion of milk for babies under nine months old is prohibited, as regulators believe it may dissuade women from breast-feeding, which is considered to be a safer and healthier option. Promotion of follow-on milks is strictly regulated.

Unmetered Internet access comes another step closer this week with Virgin Net’s launch of a &£15 flat-rate service. Initially restricted on a trial basis to 10,000 existing Virgin Net customers, the new package is called Stop-The-Clock (STC). In line with an emerging, if unofficial, Virgin group policy of “keeping it simple”, STC avoids not only […]

Energy drink Enorm is being rolled out in the UK this week as a rival to clubbers’ favourite soft drink, Red Bull. Enorm is brewed in the Netherlands by Ulvenhoutsaan12, which has licensed Watford-based Sapna Impex to handle the UK roll-out. The drink is aimed at adults and is being launched with the slogan “Life […]

Mars’ brazen claim that chocolate can cut heart disease casts fresh doubt over the FSA’s effectiveness as the consumer’s champion. With pressure groups crying out for labelling legislation and multinationals ready to defy a new code of practic