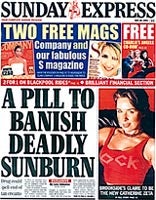 Express Newspapers has reversed its decision to split its Daily Express and Sunday Express media buying account between two agencies and handed OMD the £17m business.

CIA, which was the incumbent on the Daily Express, is understood to have lost the business because it refused to agree to some of the demands made by Express Newspaper’s new owner, Northern &amp; Shell.

“We have come to an amicable agreement with CIA, which is happy to work out its notice.”

Until then, CIA had been the incumbent on Express Newspapers’ entire business. Northern &amp; Shell joint managing director Stan Myerson took the unusual decision to split the business.

In March, CIA retained the £10m Sunday Express business, while OMD was appointed to the Daily Express, and Mediacom picked up the £6m Daily Star business. Mediacom is not thought to be affected by the decision.