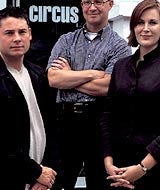 Her contract with the Dome ended in August this year.

Burrows joined the Dome in 1998, where she was responsible for brand development and advertising. She was previously at J Walter Thompson, where she worked on the Kellogg and the Madame Tussaud’s accounts.

Circus has announced two other appointments as associates – Paul Wylde, formerly a design manager with British Airways, and Mark Johnson, who co-founded In Real Life in 1995, a subsidiary of HHCL and Partners.

At BA, Paul Wylde was responsible for brand development and creative direction for redesign projects on Club Europe, Club World and the interiors for Concorde.

These new appointments follow the promotion of Katherine Atkin and Mark Hutchinson to partners at Circus.

The other partners include Paul Twivy, Tim Ashton, Tim O’Kennedy and Dilys Maltby.

Last week, Circus launched the second stage of its flood awareness campaign for the Environment Agency. The work consists of a television ad, radio slots and a direct mail campaign targeting homes in high-risk areas.

Other Circus clients include Scottish Courage, Abbey National, vshop, Microsoft and the BBC.