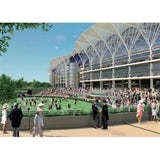 Cisco Systems, the US technology company, has signed a 2m sponsorship deal with Ascot Racecourse to become one of the new-look venue’s founding partners.

As part of the four-year deal, which will run up to and include the Royal Meeting in 2010, Cisco will provide a wireless internet network for the course. The venue re-opens on May 27 after 18 months redevelopment. Bookmaker Tote will use the wireless network for 500 mobile betting stations around the course.

Cisco will receive advertising privileges on race days, and is planning to set up a customer briefing centre that will be used for conferences on non-race days.

Cisco European head of sponsorship marketing Simon Jacobson says: “For many years we used traditional technology marketing, such as events, seminars, PR and online, but over the past few years we have expanded that.

“We have developed our presence in above-the-line advertising, like print and television, and the Ascot deal is an extension of that.”

Cisco has previously been involved in the World Matchplay Golf and the Euro 2000 football tournament, but Jacobson says the company was looking for a sponsorship opportunity that was “a little bit different”. He adds that the profile of a typical Ascot race-goer is in line with its target market of senior decision-makers.

Allied Irish Bank signed up as Ascot’s first official partner at the end of last year.