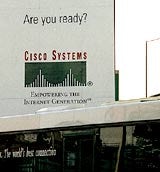 Cisco Systems UK head of marketing Manda Rigby has left the company less than one month after the US technology giant announced losses of $2.69bn (&£1.89bn) for the three months to April 28.

No one at Cisco would confirm whether Rigby resigned or was made redundant, as part of its restructuring announced in April, which will result in 8,500 job cuts worldwide.

It is not known if she has a job to go to. The company’s UK business development director Phil Smith is now overseeing UK marketing. Cisco would not say whether the move is a permanent arrangement or if the company intends to employ another UK head of marketing.

The company denies reports it is carrying out a review of its &£20m pan-European creative business. Cisco director of marketing communications for Europe, Srimath Agalawatte declines to reveal which creative agencies handled the European account for Cisco, except to say: “there are a number of agencies working with Cisco in Europe.”

The company supplies more than three-quarters of the world’s Internet hardware.