Under the campaign strapline “Anti Retro”, the latest advertising creative from the marque uses the two late icons in two 30-second films, created by Euro RSCG. It will air for the first time on Sunday 14 February during Dancing On Ice on ITV1.

The ads question the merits of looking back in time for inspiration, urging consumers to live their lives now.

Lennon is pictured asking, “Once a things been done it’s been done, so why all this nostalgia?”

“I mean, for the 60’s and 70’s, you know, looking backwards for inspiration, copying the past,” he adds.

“How’s that rock and roll? Do something of your own. Start something new. Live your life now.”

In the second ad, featuring Marilyn Monroe, the question is why do so many people live in the past, and concludes: “You should create your own icons and way of life, because nostalgia isn’t glamorous. If I had one thing to say it would be, live your life now.”

The talking heads finish with the introduction of new DS3 set to a soundtrack from Ebony Bones, entitled W.A.R.R.I.O.R.

Ian Hughes, marketing director of Citroën UK, says: “Monroe and Lennon were chosen for their universal, timeless and iconic status. Their images are in tune with the anti-retro personality of Citroën DS3; glamorous, maverick and individualistic.”

The DS3 will be on sale in the UK from Monday (15 February). 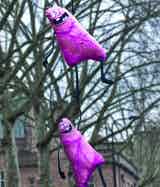 The stop smoking charity Quit is launching a viral campaign to encourage smokers to call its QuitLine service.