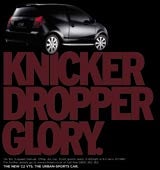 CitroÃÂ«n is launching its C2 VTS hot hatch with a controversy-seeking press campaign in lads’ mags and online. The campaign, featuring slogans such as ‘Knicker dropper glory’, ‘Because boys just wanna have girls’, and ‘Hug roads not trees’ was created by advertising agency Euro RSCG London. It will appear in titles such as FHM, Max Power and Maxim. A deal with Yahoo! will see captions on the portal’s homepage with ‘rude’ teaser slogans such as ‘nice rear’, which when clicked on resolve into fuller phrases such as ‘nice rear end’. The C2 VTS is sold with free insurance to appeal to its target market of young men. Media buying and planning is by OMD.