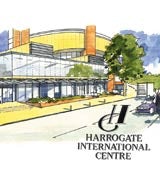 Even if you are old enough to remember the 1982 Eurovision Song Contest it is, perhaps fortunately, not something that you are likely to remember clearly. However, the event was a milestone in the development of one of the UK’s most popular conference and exhibition venues.

The event launched Harrogate International Centre’s (HIC) 2,000-seat auditorium, in which Terry Wogan presented dodgy singers from across the continent to 500 million television viewers – and Finland amassed a grand total of “nil points”. By producing the show at HIC, the BBC was able to take advantage of the auditorium’s modern broadcasting facilities, which are updated regularly.

HIC head of marketing and sales Stuart Mackay says: “Our technical division, led by David Wilmott, has developed rapidly over the years. We have excellent in-house technical production facilities, together with set-design and building services, which are available to exhibition and conference organisers. This is more cost-effective than bringing in outside contractors.”

Where is Harrogate exactly?

In the 2000/2001 financial year, 336,000 people attended events at HIC, spread across 100 conferences (30 with exhibitions) and 24 trade fairs. This figure is slightly up on the previous year, in a climate of falling visitor figures. Not bad for a centre based in North Yorkshire – although, as HIC director Paul Lewis is keen to point out, it is “in the centre of the UK”. But other UK venues offer similar services and have better transport connections, so what is Harrogate’s secret? To find out, it is necessary to look at the history of the town.

At the beginning of the last century, Harrogate was one of the foremost spas in Europe, drawing many people to its medicinal waters. The HIC as it stands today began life as the Edwardian Royal Hall – which is still part of the complex – built as an entertainment venue for visitors to the spa. The town’s popularity as a resort also resulted in the construction of hotels to accommodate the crowds.

As spa culture declined in popularity, the existing hospitality infrastructure was the key to Harrogate’s transformation into a floral resort and the Royal Hall diversified into conferences and annual general meetings. In addition to tourists, this brought businesspeople into the town, reducing the local economy’s reliance on seasonal factors such as good weather and leading to a demand for exhibition space.

Lewis says: “All this development took place while the centre was under local authority control. In 1992 we began trading at arm’s length, maintaining certain links but running independently day to day. This spurred further redevelopment and the creation of the 2,000 sq m exhibition hall Q, which has a ‘permanent shell’ scheme, removing the need for exhibitors to build their own stands. The latest exhibition hall, Hall M, was built in 2000 and has 1,500 sq m of space with an 8m ceiling.”

Right people in the right place

Of course, the transformation of the original Royal Hall into a 16,500 sq m conference and exhibition complex hasn’t happened simply because of good local infrastructure. It is down to the atmosphere of Harrogate, the well thought-out development of HIC – such as the recent partnership with Crown Catering, which has improved the centre’s banqueting and catering services – good management and effective marketing.

Penny Hanson, organiser of the biannual Prima Harrogate trade fashion show, which is held at HIC, says: “Harrogate is a lovely location, which is a big advantage. HIC is in the centre of town, so hotels are close by and it is easy for visitors and exhibitors to network in a convivial atmosphere.”

David Spencer of Carter Spencer Publishing, which organises the Hearth and Home exhibition in June at HIC agrees. He points out, however, that the town centre location also has drawbacks: “Visitors want to go there, and we have a successful show where people can walk between the venue and their hotels. But vehicle access – for loading and unloading stands and equipment – is appalling.”

Both Spencer and Hanson feel HIC has the right attitude to service. Spencer says: “We have a brilliant liaison contact and a great relationship with the venue.”

Hanson agrees: “Communication is no problem. We have one dedicated point of contact and venue costs are always transparent.”

HIC has a dedicated business development team, which helps to promote the venue. Mackay explains: “The team looks for clients from new and existing sources. We also keep our name current through a small amount of above-the-line advertising and by hosting hospitality promotions. Recently we’ve held these at golf tournaments, on the River Thames and at the Houses of Parliament. We also attend relevant exhibitions.”

A key element in providing what exhibition organisers want is market research and Mackay claims that HIC is always interested in feedback. He says: “We get a lot of information from focus groups and we take on board what we hear.”

HIC enjoys a 75 per cent repeat business rate, so it must be doing something right. Lewis says: “All our organisers are friends and we’re fortunate in having a lot of friends.”

Twinings, the speciality tea company, is searching for a sales and marketing director to replace Ian Dewar, who is retiring at the end of the year. The arrival of a new marketing director will put the company’s advertising agencies on alert. Mitchell Patterson Grime Mitchell handles the &£500,000 advertising business and was appointed four years […]

Part of Yellow M, the former advertising agency of the Conservative Party, has gone into receivership. Yellow M Newcastle ceased trading last week and 25 staff have been made redundant. Kroll Buchler Phillips is winding up the company, founded by Mike Dethick in 1992. Healthfood shop Holland &amp; Barrett, hardware and gardening retailer Robert Dyas, […]

Travelex is the world’s largest foreign exchange operator and its sponsorship of ITV’s World Cup coverage will help to raise its profile, says Gary Thurtle