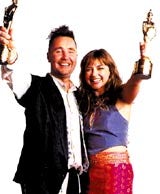 The British Phonographic Industry (BPI) is seeking a sponsor for the Classical Brit awards and will launch a CD and website to promote its event.

The Classical Brits event was launched last year by the BPI to reflect the increasing popularisation of classical music. The organisers are looking for a main sponsor prepared to pay up to &£750,000.

The inaugural show at the Royal Albert Hall had no sponsor, but attracted a TV audience of 4.5 million viewers and beat Who Wants To Be A Millionaire? to first place in the Audience Appreciative Index for the spring/summer season on ITV.

The event takes a similar form to the BPI’s pop music award ceremony, the Brit Awards, which have been running for over ten years and have been sponsored by MasterCard for the past two years.

The 2001 Classical Brits will be held in late May and will be broadcast on ITV in early June.

BPI chairman Rob Dickens says: “We are looking forward to developing the event and attracting even more people. In order to do so, we are seeking a suitable commercial partner.”

The BPI is putting together deals to produce a CD of the Classical Brit award winners and a website dedicated to the event.

In the fortnight following the event’s broadcast, performing artists saw a 150 per cent increase in album sales and classical albums overall saw a 35 per cent sales uplift.