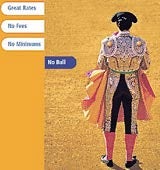 Claydon Heeley pitched for the business against the direct marketing arm of Vallance Carruthers Coleman Priest, VCCP Plus, and one other agency. Last November, VCCP won the &£6m above-the-line advertising account in a pitch handled through the AAR.

ING Direct operates in eight countries, including France, Germany and Spain. The UK launch is planned for April, but the company is keeping the details under wraps. A spokesman says: “ING Group looked at many different markets for ING Direct and the UK is one of those markets.”

ING Direct offers savings, lending and investment products to consumers through the Web and telephone. One of its main products is the Orange savings account, which it claims offers a high interest rate with no account charges.

ING Direct opened its French operations in March 2000, and Italy followed a year later. Last June, ING Direct in France moved its advertising from Leagas Delaney in Paris to J Walter Thompson as part of an overhaul of its marketing operations.