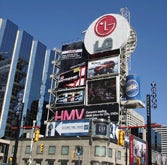 Clear Channel Communications, the US media group, has reported a 52% increase in earnings for the fourth quarter of last year, which it puts down to strong growth in its international outdoor sales. The company says revenues for its outdoor division, for the year to December 31, were up 13% to $3.3bn (£1.67bn).

Overall revenues for Clear Channel, which also operates radio stations in the US, were up 6% to $6.82bn (£3.46bn) for 2007. Chief executive Mark P. Mays calls the results “outstanding”.

He adds that the company also exceeded its targets for the roll out of digital boards in 2007 and is “on course to accelerate the roll-out” in 2008.

During 2007, Clear Channel installed 109 new digital displays in 17 markets. It plans to install at least 150 more this year.

Between blogs, forums, podcasts, Facebook, MySpace, Second Life, Wikipedia, Del.icio.us, Twitter, Digg, Flickr and all the rest, the array of social media options now at marketers’ disposal can be intimidating. The challenge for marketers now, as ever, is to get past the hype and get onto what works.

Becoming a fashion label failed to pay dividends for Louis Vuitton – the world’s most counterfeited brand, but can a new TV and cinema ad re-establish LV in the luxury sector, asks Kate O’Flaherty