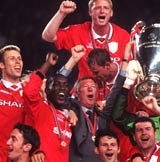 English football appears to be on a roll. The England team is in prime position to win a place in the 2002 World Cup following the 5-1 drubbing of Germany and qualification for the tournament can only serve to boost the commercial opportunities surrounding the game.

The interest generated by England’s performance is bound to filter down and serve to increase the income of the 92 English professional football clubs. The English league is the first football league in the world to produce a combined income of more than &£1bn – up 13 per cent to &£1.078bn for the 1999/2000 season, according to Deloitte &amp; Touche’s Annual Review of Football Finance.

But look a little deeper and you can see that the clubs’ ability to generate revenue is being more than matched by their ability to spend. The league may well have generated an income in excess of &£1bn but according to Deloitte &amp; Touche, profitability fell during the 1999/2000 season. The Football League clubs’ losses outweighed the Premier League clubs’ profits, so that England’s professional clubs made an overall operating loss (of &£59m) for the first time since the early Nineties.

One major reason for this development is the rise in players’ wages, which in the past decade have increased from a weekly salary of &£3,000 to around &£75,000, according to Simon Rines, author of Driving Business Through Sport. Transfer fees have also escalated from &£5m, the sum Lazio paid for Paul Gascoigne in 1992, to the &£28.1m paid for the Argentine star Juan Sebastian Veron by Manchester United earlier this year – a record fee for the UK.

Faced with increasing pressure on income levels, clubs are desperately looking to increase revenue streams and make the most of their brands.

Arsenal has just appointed design consultancy 20/20 to review the brand’s image across a range of activities. The review, which according to one football marketer is looking at how the club can marry its heritage with commercial acumen, comes at a crucial time for the club as it finalises plans to leave its Highbury ground by 2004 and move to a 60,000 seater stadium close by. Naming rights for the new stadium are clearly on the agenda.

The marketer says: “An overhaul is long overdue. To get a consistency in all the club’s commercial activities it needs to identify Arsenal’s DNA – its core values.”

He claims that clubs can be sensitive to the fans while remaining ambitious commercially. Industry insiders point to Bolton Wanderers and Barcelona – two clubs that have managed to achieve a balance between these interests. Bolton’s ground and kit is sponsored by Reebok, which was founded in the town. Barcelona allows fans to have a say in commercial management issues, as it is run as a collective, and refuses to have a sponsor on its shirt. Its revenue comes from television and associate sponsors.

Arguably the identities for some clubs are changing as their fan base expands. Arsenal and other major clubs such as Liverpool, Leeds and Chelsea, no longer have the majority of their fans living within the vicinity of the stadium.

We know about Manchester United’s pioneering adventures in the Orient, the frenzied pre-season tours and the high street stores in Hong Kong and Singapore. But while Manchester United may be recognised as a leader in overseas marketing initiatives, 95 per cent of the club’s income is from the UK.

Yet it is still not hard to understand why other clubs, such as Arsenal, are keen to extend their brand into different markets. The club recently paid &£3.5m for Japanese star player Junichi Inamoto who, some industry reports suggest, could be worth &£100m in merchandising and other forms of income, as fans in Asia go mad for the young star.

Asia is the buzz word in football at the moment and clubs are hoping that if England gets through to the World Cup in Korea and Japan, the event will generate interest for their own brands.

Leeds United appointed Stuart Ogg in March (MW March 22) as the club’s first international brand manager with a brief to establish business partnerships in the Far East, Australia, Scandinavia and Ireland, focusing on retail, manufacturing and licensing. It’s no surprise then that Leeds has signed players from most of these parts of the world.

But while the geographical origins of a player can theoretically help to increase demand for shirts and other club-branded paraphernalia in his home country, merchandising as a whole is on a downward spiral. It’s a &£200m a year industry on the wane. Last year Manchester United sold &£14.3m of merchandise. But in the six months to April the club’s financial figures showed a ten per cent drop in merchandising revenue.

There are a number of reasons for this, one being the fall in sales of replica shirts, which reached their peak in the laddish Nineties.

Sport Business finance editor Matthew Glendinning says: “Replica shirts are no longer the symbol of a fashion victim as well as a fanatical supporter. Fans are also fed up with being ripped off.”

Merchandising, as a form of revenue for a club, follows behind broadcasting rights, sponsorship, and, in many cases, gate receipts.

Broadband technology may provide another revenue stream as teams sell their own rights on a pay-per-view basis, cutting out the media moguls such as Rupert Murdoch.

Some might say that clubs have stretched their brands to the limit. Others would argue they haven’t even started. Either way, as Glendinning says: “The bottom line is you can’t be a commercial success unless you’re winning on the pitch.”