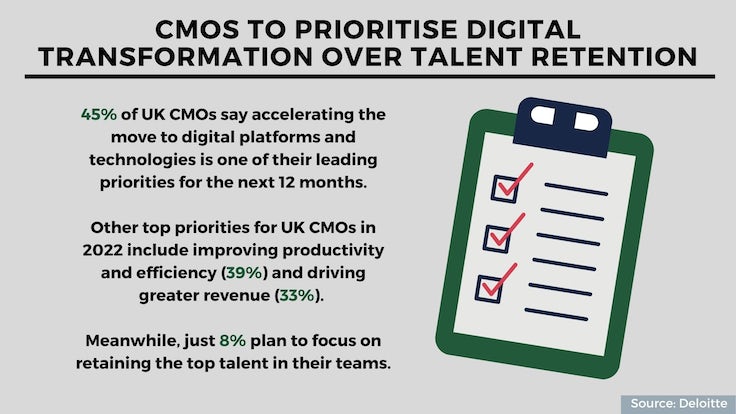 The top priority for CMOs in the UK over the next 12 months is accelerating the move to digital platforms and technologies, with almost half (45%) of the 120 questioned in Deloitte’s inaugural UK CMO survey agreeing it would be one of their leading priorities.

This comes following previous research by Deloitte Digital revealing one third (33%) of consumers do not think online services are good enough.

Other top priorities for UK CMOs in 2022 include improving productivity and efficiency (39%) and driving greater revenue (33%). Meanwhile, just 8% plan to focus on retaining the top talent in their teams.

According to the survey, CMOs are valuing analytical skills within their teams more highly than creativity, with 31% of respondents stating their highest-performing team member possesses analytical experience, which accounts for their success. Comparatively, just 18% pointed to creative experience as the key reason for their strongest team member’s success.

Furthermore, more than half (57%) of UK CMOs say they have met goals in their diversity and inclusion efforts for brand imagery and messaging, with an additional 9% stating they have made significant progress and exceeded these goals.

Plus, with consumer behaviour having changed as a result of the pandemic, 90% of CMOs are looking to invest in hybrid experiences, integrating the physical and digital world. 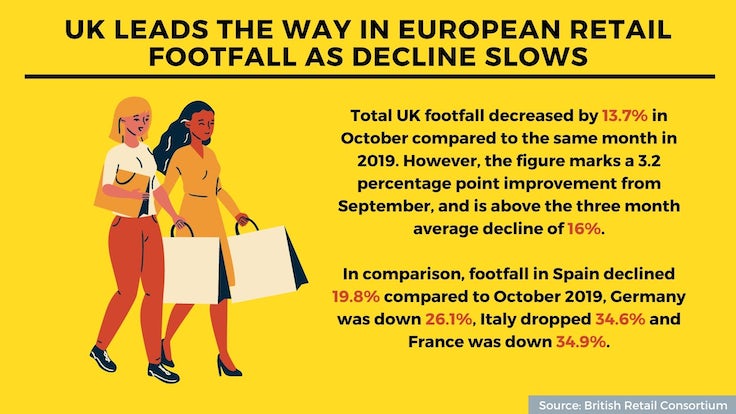 Total UK footfall was once again down on a two-year basis this October, having decreased by 13.7%. However, the figure marks a 3.2 percentage point improvement from September, and is above the three month average decline of 16%.

In terms of region, Northern Ireland saw the shallowest footfall decline at 10.8%. Wales (-13.1%) and England (-13.7%) followed, while Scotland saw the deepest decline for the third consecutive month at 17%. 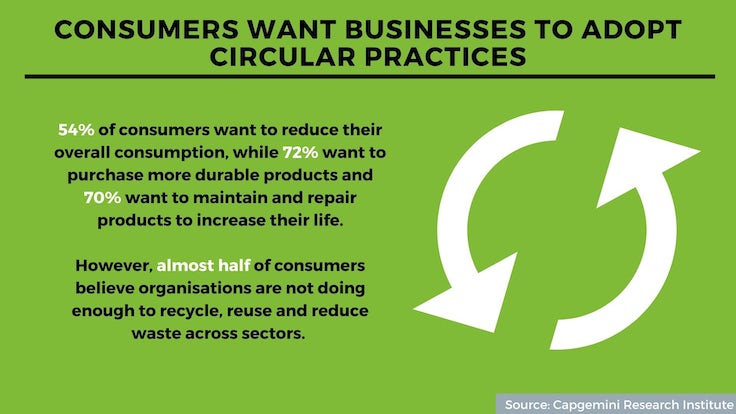 More than seven in 10 consumers want to adopt sustainable circular practices, but businesses are acting as a barrier to behaviour change, according to a survey of 8,000 consumers globally.

The Capgemini Research Institute report, Circular Economy for a Sustainable Future, finds more than half of consumers (54%) want to reduce their overall consumption, while 72% want to purchase more durable products and 70% want to maintain and repair products to increase their life.

However, almost half believe organisations are not doing enough to recycle, reuse and reduce waste across sectors, while 67% expect businesses to be responsible when advertising products and to not encourage excess consumption.

As a result, 44% of consumers have increased their spending on food and beverage companies that focus on recycling, reuse and reducing waste over the past 12 months, while 40% have done so for personal and household-care products.

But there are barriers preventing them from taking more positive action, consumers say. Three in five (60%) cite a lack of sufficient information in product labelling as a reason for not taking positive circular actions. Some 55% say expense is a barrier to repairing products and over half (53%) don’t want to compromise on convenience.

Meanwhile, at present consumers are primarily focused on the post-use phase of circular practices, with 58% saying they segregate and dispose of food waste post-use, but only 41% say they buy food that uses minimal packaging. 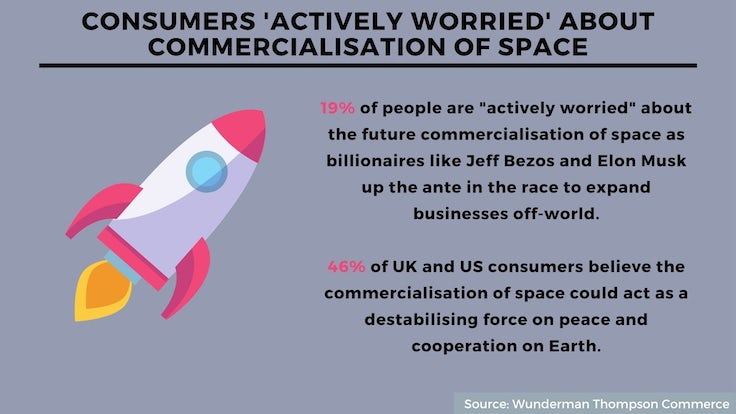 As the likes of Jeff Bezos and Elon Musk up the ante in the race to expand businesses off-world, new research reveals half (46%) of UK and US consumers believe the commercialisation of space could act as a destabilising force on peace and cooperation on Earth.

On top of that, a third (36%) believe that billionaires’ forays into space are for their own gain, while less than one in six (15%) believe those trips are for the betterment of the human race, according to Wunderman Thompson Commerce’s ‘Space Commerce: A Giant Leap for Enterprise’ report. Of the 4,200 UK and US consumers surveyed, almost a fifth (19%) said they are “actively worried” about the future commercialisation of space.

Instead, the majority of consumers agree the future of space should not be in the hands of billionaire business owners. The most favoured option is a blend of individuals, corporations and governments (26% agreed), while a quarter (25%) believe the onus should rest with governments and space agencies alone.

Meanwhile, despite almost half (44%) of consumers disliking the idea of adverts and billboards in space, more than half (55%) would be happy to pay a premium for a product from space if it arrived faster. A third (31%) believe the commercialisation of space could benefit them personally. 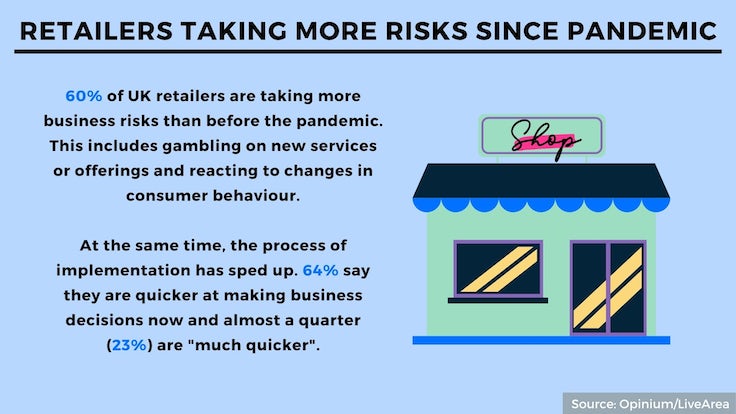 Six in 10 (60%) of UK retailers are taking more business risks than before the Covid-19 pandemic. This includes gambling on new services or offerings and reacting to changes in consumer behaviour.

At the same time, the process of implementation has sped up, with over half (54%) of the 150 retail decision makers surveyed claiming the approval process for new products, features or solutions has become quicker as a direct result of the pandemic. Some 64% say they are quicker at making business decisions now and almost a quarter (23%) are “much quicker”.

When deciding on new ideas to bring to market, technology was identified as the main driver of innovation, with six in 10 (60%) of respondents agreeing. Nearly half (49%) say innovation is driven by profits, while customer demand (48%) was another key driver.