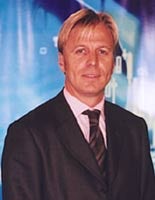 CNBC Europe, the cable and satellite business channel, has appointed Visa International vice-president of brand marketing Matthias Hanssen to the new role of marketing director, in an effort to broaden the channel’s appeal.

Hanssen’s first move has been to appoint creative agency Tequila/ London on a project basis. The first project will be a three-month $2m (&£1.38m) press campaign starting next month, with some of the space taken through contra deals with other media companies.

Hanssen worked with Tequila while at Visa and handed the agency the business without a pitch.

Hanssen’s arrival follows a review of the marketing department by CNBC Europe earlier this year. His role was created as a result of this review, which discovered a need to place greater emphasis on marketing within the company.

CNBC Europe aims to develop a stronger brand identity and is looking at ways to attract more individual investors as viewers on top of its mainly corporate users.

Hanssen says: “The challenge for us is to grow in terms of viewers and advertisers.”

CNBC Europe was set up in 1996 by NBC and Dow Jones, publisher of The Wall Street Journal. It is potentially available in 33 million homes, offices and hotels.