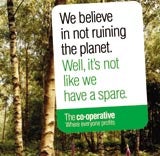 The Co-op has consolidated its &£20m media account into Rocket, following a competitive pitch.

It is understood that the agency pitched against incumbent agencies MediaCom North, TCS North and Starcom.

The retailer announced its intention of pooling its buying and planning into one shop as part of a plan to group all the Co-op’s brands under a single identity late last year (MW October 27, 2005).

Previously, MediaCom North handled the buying and planning for the main group, as well as food retailing and membership.

The media rethink followed the Co-op’s decision to shift its &£15m supermarket advertising business into McCann Erickson. The creative account was handled previously by Euro RSCG.

The group has been testing the unified brand “The Co-operative”, bringing together financial, healthcare, retail and funeral services under one identity.

In a separate move, the retailer is considering shaking up its financial services division, which is overseen by Craig Shannon, business management director of the Co-operative Bank and Co-operative Financial Services (CFS).

The move could spell the end for the group’s separate banking and insurance brands, and create a single organisation (MW November 24, 2005).