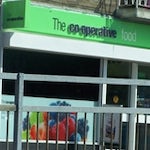 The chain reported pre-tax profit in the first-half of 2010 fell to £169.2m down from £244.5m in the previous year, accounted for by the acquisition of Somerfield and Britannia.

The group also reported an 11.5% overall rise in sales at its food business but a 1% fall in like for like sales, hit by the integration of the Somerfield chain. It adds that sales in 2,500 stores that have been refurbished under the new Co-op brand increased sales 2.5%.

The chain says it is making “enormous strides” integrating supermarket chain Somerfield into its food business and Britannia into its financial services business but “still has a way to go”.

The Co-op says profits at its financial services arm rose by 34%.

The Co-op’s travel business suffered a difficult period reporting a 6.6% fall in sales to £126m and 70% fall in profit to £0.4m, impacted by a number of factors including snow in the UK, British Airways strike action, the Icelandic volcano eruption that interrupted flights and unrest in Greece and Thailand.

Peter Marks, group chief executive, says: “As anticipated, 2010 has been challenging so far, with tough economic conditions across all our businesses. Looking ahead, however, we do not expect things to improve until late 2011 at the earliest.”

By the time Somerfield and Britannia are fully integrated into the business, The Co-op believes it will be in a better position to compete in tough markets.