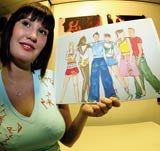 Paris, Milan, New York, Northampton… OK, maybe that last entry is not renowned as a hotbed of haute couture, but the marketing brains at Northampton Town Football Club have ambitious plans.

Club chairman David Cardoza has commissioned a leisurewear brand – N Range – to “take the football club’s name to a wider market”. Well, it’s less of a tall order than leading the Cobblers, currently mid-table in Division Three, to European domination.

In true Nationwide League style, big-time Charlies such as Alexander McQueen and Stella McCartney were not quite in the club’s price range. Instead, Mr Cardoza, whose team went on a lucrative FA Cup run this season, stumped up 100 quid and a digital radio as a prize for the best design submitted by local fashion students. The Diary can only assume such cost-cutting is part of a strategy to avoid a Leeds United-style financial collapse. And nothing to do with getting students to knock up a few designs on the cheap.