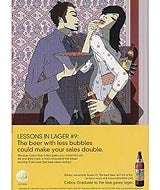 Cobra Beer and environmental charity WWF-UK have had appeals to earlier adjudications by the Advertising Standards Authority quashed by the ASA’s independent reviewer.

The advertising watchdog ruled against Cobra Beer’s “misleading” press ads in April, following complaints from industry rivals. The ads, created by McCann-Erickson, used the tagline: “The beer with less bubbles could make your sales double.” Rivals Refresh UK, UBSN and Carlsberg-Tetley Brewing challenged the assertion that Cobra was less gassy than its competitors, and doubted whether it could substantiate the claim that selling Cobra beer could double beer sales.

In August, the ASA rapped WWF-UK over a national press ad highlighting the potential risks posed by man-made chemicals. The ad was found to be unduly alarming (MW August 8). Complaints against the ad, which featured the photograph of a foetus and said: “Who cares where toxic chemicals end up?”, were lodged by the chemical industry.

The rulings against both advertisers remain in place and they have have been asked to consult the Committee of Advertising Practice Copy Advice team before making similar claims in future campaigns.

The ASA has not upheld a complaint against a Gianni Versace jeans ad, featuring a male model holding a lit cigarette. According to the ASA, the ad does not promote smoking.

The ASA has ruled that a Volkswagen Polo press ad, showing a car with its driver’s door open near a bent signpost, with the strapline: “The tough new Polo…” is unlikely to lead consumers to believe that the door is stronger than the signpost.

Soul has created a poster campaign for London Mayor Ken Livingstone, tackling the issue of domestic violence. The campaign, which is being run by the Greater London Authority, is an attempt to move away from the portrayal of domestic violence sufferers as victims. Instead, it turns the focus on the men who commit these crimes. […]

Ditching long-term contracts for flexible partnerships is opening up sponsorship to new brands and revitalising its role as a key marketing tool, says Nigel Currie

And so 2002 draws to a close. It’s been a year of quiet consolidation, with a dearth of big ideas. Text messaging has dominated digital marketing activity, and intranets – used for internal corporate communications – have provided more journalistic stimulation than good old fashioned business-to-consumer websites. As we enter the biggest selling season of […]