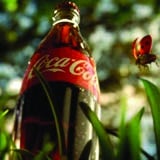 Coca-Cola has celebrated its 125th birthday. To mark the occasion, Marketing Week looks back at some of the master brand’s television advertisements from the dawn of the TV age to the present day.

Over twelve and a half decades, Coke’s marketing has striven to mean all things to all people in all corners of the world, but with one overriding theme: celebration.

Whether it is ads featuring long forgotten 80s boy bands, whimsical animated characters or a multi-national, multi-racial choir singing tales of global unity atop a hill side, all aim to convey that the drink is an accompaniment or a catalyst for a joyous life.

Well, that’s the theory anyhow. Below is an arbitrary selection of ads, from around the world, indicative of the brand’s journey through the decades.

This 1950s ad runs like a cosy interlude to the sort of variety show presented by Andy Williams or Perry Como. A low octane, matter of fact explanation of the brand’s properties that would pass as an ad for an energy drink nowadays. “A little lift just when you need it”.

Coke’s inadvertent contribution to the psychedelic swinging 60s was not a kaleidoscope illustration of love and peace, but this, frankly bizarre take on Alice in Wonderland.

There could be no other ad chosen to reflect where Coke brand chiefs were at in the 1970s. The Vietnam War was raging, industrial unrest brought British businesses to a standstill and US president Richard Nixon was promising that there will be no “whitewash at the White House” (over Watergate) before being found to have done exactly that. Coca-Cola, understandably, wanted to throw a big comfort blanket around the world “and furnish it with love”.

By the 1980s, the brand was looking to align itself with popular culture. Perhaps inspired by the Michael Jackson starring Pepsi ads of the time, Coke turned to Bobby Brown fronted boy band New Edition to appeal to the MTV generation

The 90s saw a plethora of ads that had little in the way of narrative but had one clear (sort of) message, Coke is part of YOUR fun-filled life. Illustrated perfectly by this ad, which features the most memorable of all Coke jingles, All together “Always Coca-Cola”.

The 2000s, and a spot that corralled a collective “I loved that ad” from Marketing Week’s editorial team. The Grand Theft Auto inspired creative that offers a simple, but important life lesson to all: “You give a little love and it all comes back to you”. A message sung to a melody so soaring that Simon Cowell missed a trick not getting one of the X-Factor winners to sing it at the end of their “journey”.

To 2011, and the latest in a line of technicolor ads to carry the “Open Happiness” strap. Insects liberate a bottle of Coke in the cause of nature? Or was it all a dream had by the handsome everyman? Either way, it is utterly bonkers but boy does it look nice.