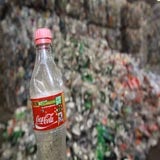 The soft drinks giant unveiled the figures to coincide with Recycle Week 2010, ahead of launching its 66th UK Recycle Zone in Peterborough city centre today (24 June).

It says that a tonne of material is collected daily on Oxford Street alone, which is the yearly equivalent of around 99 million empty Coke cans and 60% of all the waste collected in the 260 dual access bins – one side for ordinary rubbish and one side for recyclable materials such as paper, plastic bottles and aluminium cans – is recycled rather than going to landfill.

Lauren Branston, communications director of Coca-Cola Great Britain, says: “We’re committed to making a positive impact on the environment and encouraging consumers to see our empty bottles and cans as a valuable resource that if recycled can be used again and again. One of the most effective steps we can take to significantly cut the carbon footprint of our drinks and help reduce littering, is to encourage people to recycle the empty packaging.

“As these statistics show, if the facilities are available people will recycle and we can save tonnes of valuable material from going to landfill. We’re encouraged by the uptake so far, but we know there’s a long way to go and this summer we’ll be finding even more opportunities to help consumers recycle at Coca-Cola Recycle Zones at outdoor festivals and events across the UK and via our partnership with RecycleBank.”

Coca-Cola, in partnership with Westminster City Council, installed the bins in March this year as part of its commitment to help London stage a ‘green’ Olympic Games in 2012 and leave a lasting environmental legacy for the city.

The partnership was inspired by research conducted by Coca-Cola revealing that more than half of Londoners (56%) want to recycle when away from their homes but 97% think that is made more difficult by a lack of facilities. It has been advertising the scheme since September last year.

Coca-Cola and Coca-Cola Enterprises have committed to introducing 80 Recycle Zones across GB by the end of 2011 and are working in partnership with WRAP.

A series of Coca-Cola Recycle Zones at high profile summer events and outdoor festivals has kicked off including the Isle of Wight Festival and V Festival and where consumers will be invited to ‘swap for swag’ – exchanging empty PET bottles for limited edition items including rain ponchos, torches and T-Shirts all of which contain recycled plastic made from empty bottles.