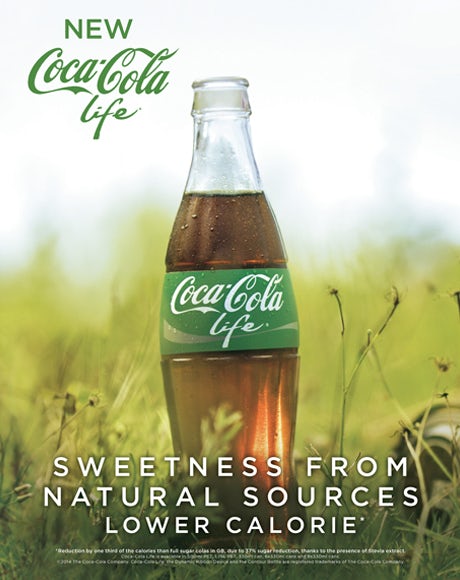 The brand, which has a third fewer calories and sugar than Coca-Cola and is sweetened using a blend of sugar and naturally sourced sweetener, launched in the UK last month.

A month long ad campaign is being rolled out now at 7,000 outdoor locations nationwide. Billboards, bus and digital screen ads will be supported by print, digital, experiential and point of sale activity.

TV will not be used in the launch activity but is under consideration for a second wave in 2015.

It is hoped the launch campaign will reach 96 per cent of what Coca-Cola calls its “core audience”, existing consumers of Coca-Cola, Diet Coke and Coke Zero.

Bobby Brittain, Coca-Cola UK’s marketing, strategy and activation director told Marketing Week that the “social conversation” since the drink’s launch has been positive “from consumers who love the taste” and that it is hoped the campaign will encourage trial.

The wisdom of launching Life has been questioned by many observers including Marketing Week columnist and brand consultant Mark Ritson, who argued that it lacks natural ingredients to attract people looking for an alternative to Coke’s existing brands.

Responding to a question from Marketing Week about why Coca-Cola Life will succeed where similar product Pepsi Raw failed, Brittain says: “We are constantly listening to our consumers to create new, innovative products that meet their preferences.

“Coca-Cola Life is our newest innovation that provides consumers with an option with less sugar and fewer calories and that is sweetened from natural sources. It has been really well received in Argentina and Chile, and we think that consumers in GB will love it too.”

Coca-Cola will be hoping Life lifts its fortunes after industry data showed sales for its masterbrand and Diet Coke fell for the year to 19 July.