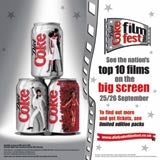 Coca-Cola Great Britain is launching a range of Diet Coke cans featuring images from famous films. Cans, as well as the labels on 500ml and two-litre bottles will feature visuals from Amelie, American Beauty, Charlie Chaplin’s The Kid, Dirty Dancing and Saturday Night Fever. An image from Gone With the Wind will appear on bottle labels, but not the cans. The limited-edition cans will appear on shelves by the end of this month. The initiative supports the drink brand’s strategy to be associated with Hollywood and film. Diet Coke carried out on-pack Hollywood prize promotions earlier this year, and is lining up a ‘Film Fest’ in late September, with the Vue cinema chain as partner. The festival will feature ten titles voted for by Diet Coke consumers.