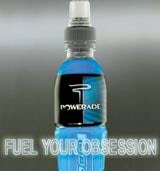 Coca-Cola will launch a multi- million-pound advertising push behind energy drink Powerade, along with other brands in its soft drinks portfolio, on the back of the company’s &£15m sponsorship of the Football League.

The company is positioning Powerade as a professional sports drink in a bid to directly rival GlaxoSmithKline’s market leader Lucozade Sport. The company will give supplies of the drink to each of the 72 football clubs for use on the pitch during games. Players will be encouraged to either drink Powerade or drink from Powerade-branded bottles.

The company will also work with the clubs’ medical staff to create training programmes using Powerade. Advertising for the brand will run in matchday programmes. The company also plans to launch a number of initiatives to promote Diet Coke on the back of the association.

The strategy will be unveiled this week, when the company will confirm its plans to launch a &£7m ad campaign that will see its iconic red and white logo transformed into the colours of the 72 Football League teams (MW last week).

The company will also launch the “Million Pound Goal Chase”, a challenge for teams in the three leagues to score more goals between them than in any other season. The clubs will receive &£1m for the training of new talent if they succeed in beating the 4,354 goals scored in the 2001/02 season.

Now the Diary has heard of the Hull Truck theatre. And, in the old days, there were even such things as stagecoaches, which may or may not have housed touring productions of the latest farce, tragedy or Lloyd-Webber extravaganza. So the latest wheeze from BMW is really rather old hat: to advertise the launch of […]

Youth clothing brand Firetrap is relaunching its website, with a new focus on cult brand icon Deadly the Gnome, making his debut appearance on the internet. Designed by new media agency Cimex, the site will be an integrated part of Firetrap’s latest marketing campaign, and will support the opening of its first standalone store later […]

Carlsberg UK marketing chief for lager brands Iain Paton has left the company without a job to go to. His responsibilities have been handed to director of ales Darran Britton, who looks after the Tetley’s Bitter range. It is understood that Paton is not being replaced. As director of lager brands, Paton reported to managing […]