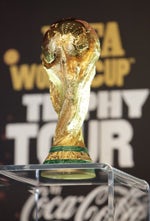 Consumers will be able to help raise funds by donating points on Coke Zone, and Coca-Cola will match every point donated to buy supplies for the “Water for Schools” initiative.

Coca-Cola Great Britain president Sanjay Guha says: “At Coca-Cola we are determined to use the power of the FIFA World Cup to leave a lasting legacy for good across Africa, long after the final whistle has blown. As a company which depends on water for our business, we understand how precious and essential it is to everyone’s quality of life.

“To mark the first time the continent has hosted the tournament, we have pledged to connect hundreds more schools in Africa to clean drinking water. And we want to invite our consumers and football fans to join us in this effort.”

Coca-Cola will back activity globally during the World Cup. Each time a player celebrates a goal with a dance, Coca-Cola will donate more funds to the Coca-Cola RAIN “Water for Schools” effort.

Funds raised will be deployed toward initiatives with specific emphasis on Africa – as the continental host for the tournament – and managed by The Coca-Cola Africa Foundation to make a positive direct impact on students and communities. In addition to this fund-raising, Coca-Cola will also donate $1m in 2010 to clean-water projects at African schools through RAIN.

Coca-Cola’s UK head of loyalty Graham Horner recently left the company after three years with the soft drinks giant. He has been replaced by HMV marketer Paul Sinclair, who joins as senior loyalty manager.