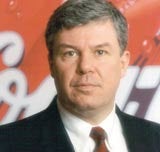 Coca-Cola is looking for a new global marketing chief following the resignation of Stephen Jones.

The former UK Coca-Cola marketer had been expected to quit when Steven Heyer arrived from AOL Time Warner’s Turner Broadcasting System in 2001 as president of new ventures.

Heyer was promoted to president and chief operating officer in December last year and is regarded as heir apparent to chairman Doug Daft. Jones reported to Heyer rather than directly to Daft.

He was promoted to senior vice-president of consumer marketing for Coca-Cola Japan in 1994.

Coca-Cola has recently developed a new organisational structure focused on the three core operations: marketing, geographic operations and innovation, and research and development.

However, the recent launch of Vanilla Coke in the US has proved such a success that PepsiCo is considering developing a similar cola variant. Vanilla Coke is expected to launch in the UK next month.

The National Magazine Company’s Company magazine is to downsize. It will move from an A4 to American A4 format from its August issue, on sale in July.

Seeboard Energy marketing and sales director Nigel Samuels has left following the company’s acquisition by Electricité de France-owned London Electricity Group. He does not have a job to go to. LE Group recently promoted Seeboard’s head of residential markets, Travers Clarke-Walker, to director of marketing for retail (MW last week) as part of its ongoing […]