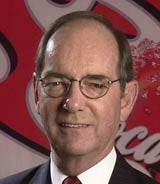 Coca-Cola’s chief marketing officer Chuck Fruit has left his job just months after his role was reduced. It is understood that he does not have a job to go to.

Fruit, who had been with the company since 1991, sent an e-mail to Coca-Cola employees on Monday in which he revealed that he had been discussing his future at the soft drinks giant with Mary Minnick, the head of marketing, strategy and innovation.

The talks follow a restructure of the marketing division that Fruit was involved with.

He began reporting to Minnick following her promotion in May, but remained chief marketing officer. She was promoted from head of Asia to head of marketing, strategy and innovation.

Fruit, who joined as head of global media services after 15 years with Anheuser-Busch, will stay on in an advisory capacity.

He was appointed to his role in June 2004, replacing Daniel Palumbo (MW June 24, 2004). Coca-Cola has confirmed that he will not be replaced.

Fruit now will act as a senior advisor to Minnick and is expected to focus on new media strategies, sports and entertainment marketing initiatives and sponsorships.

Your feature “Advertisers find a new playmate in the computer games industry” (MW August 18) is very perceptive. However, it’s just another form of partnership marketing that brands should be looking at anyway – and many already have been.

Whatever happened to warm beer? There was a time when it was what we Brits were famed for around the world/ warm, flat beer served by a comely, buxom wench. Now everything is cold or extra cold and The Sun is launching a campaign to protect ou