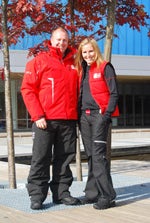 The move is part of the company’s commitment to a green Vancouver Games. It adds it is commited to taking the same approach in London for the 2012 Olympic and Parlaympic Games.

Each uniform contains up to 120 used plastic bottles. The uniforms are part of a series of pioneering initiatives to create Coca-Cola’s first ever zero waste, carbon-neutral sponsorship at the Games.

Coca-Cola, which has been supporting the Olympic Movement since 1928, is sponsoring the Winter Games which open today (12 February).

The green initiatives include zero waste achieved through the use of sustainable packaging and by ensuring 100 per cent collection of all plastic (PET) containers used throughout Olympic venues and carbon neutrality through using Introducing leading edge technologies including HFC free coolers and a fleet of hybrid carts and delivery vehicles to reduce greenhouse gas emissions, with all emissions offset.

The company will also be using wood salvaged from the pine-beetle epidemic in British Columbia to produce café furniture for the athletes’ village and delivering its drinks using a fleet of diesel-electric hybrid heavy-duty vehicles and electric cars within the venues.

It follows Coca-Cola’s approach to carbon-neutral sponsorship at the Beijing Games where the company was awarded the first ‘green medal’ by Greenpeace for using climate-friendly coolers and vending machines in all official venues.

Coca-Cola GB president, Sanjay Guha, says: “The Vancouver Winter Olympics will set a gold standard for Coca-Cola and we are committed to adopting the same approach for London 2012. Being a sustainable business is the right thing for our customers, business and the environment. We are committed to being a leader and the prize is inspiring communities across the globe to take action on the environment.”

In partnership with WRAP, Coca-Cola is establishing 80 recycle zones by 2011, making it easier for consumers to recycle when they are out and about.

Fiat has signed up to become the official supplier to British Cycling, which includes the Great Britain Cycling and Para-Cycling Teams.

Fabio Capello’s decision to sack John Terry as England captain could cost the player up to £5m in sponsorship deals, as brands look to determine his suitablity as an ambassador, according to official estimates.