Coca-Cola Zero Sugar achieved the greatest rise in ad awareness in August of any UK brand, according to YouGov BrandIndex data, with the market research company suggesting the summer campaign has “been a success so far”.

Coke Zero Sugar’s ad awareness score, which analyses whether respondents have seen an ad from a brand in the previous fortnight, has significantly improved over the past month. Its score rose from 6% in early July to 17% in the last weeks of August. Meanwhile, Coke Zero Sugar’s purchase consideration, which asks whether a respondent would consider buying a brand’s product, rose from 11 to 16 over the same time period.

Having pumped £10m into promoting the rebrand, you would expect to see some sort of impact. However, Coca-Cola claims the Zero Sugar rebrand is translating to the most important success metric of them all; sales.

According to figures from Nielsen cited by Coca-Cola, sales are up by a quarter since the campaign launched compared to the same time last year. And the company claims reaction from consumers has been “really positive” so far.

“The launch of Coca-Cola Zero Sugar this summer followed years of research and development to get the recipe even closer to the 130-year-old original to encourage more Coca-Cola Classic drinkers to give it a try. Along with a new look, we also renamed it to make it even clearer that it is sugar-free,” says a spokesman.

“The launch was supported by our biggest marketing campaign in a decade and we will continue to invest to raise awareness and trial of our latest great tasting, no sugar drink.”

The fizzy drinks brand originally announced it would be revamping its ‘Coke Zero’ variant in April this year after discovering that half of its consumers did not know it contained no sugar. Coca-Cola launched a £10m campaign at the beginning of July to actively promote moderation and reduce consumers’ sugar consumption. The fizzy drinks giant wants 50% of its sales by 2020 to come from its non-sugar options.

Sarah Murphy, director of YouGov BrandIndex UK, says the rebrand looks like the right move. She explains: “While a large part of the marketing effort was to inform consumers of the product’s sugar content, company bosses still want sales of the drink to increase. On this front, the early signs are encouraging.”

YouGov’s research also shows that among those that would consider buying Coca-Cola Zero Sugar, four in 10 (41%) say they tend to count the amount of calories they consume. However, 60% of the group says their diet ‘could be healthier’.

Murphy adds: “While it’s clear that the campaign has been registering with consumers, there is an opportunity to convert those that haven’t yet become customers, with a prominent focus on the health benefits of the drink.” 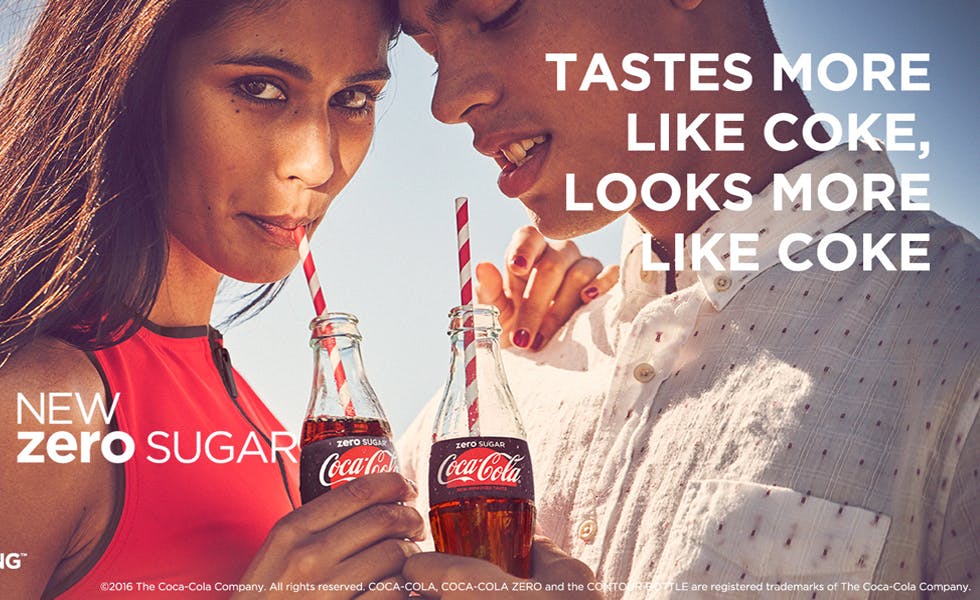