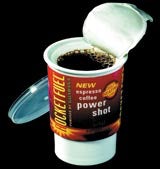 The Department for Transport has endorsed energy coffee brand Rocket Fuel as a partner in its high-profile nationwide driver tiredness campaign THINK!.

A national promotion launched later this month will see the coffee drink brand, owned by Food Brands Group, undertake a massive sampling campaign in forecourts of supermarket chains, independents and service stations throughout the UK.

The activity, leading up to the August Bank Holiday, supports the Government’s THINK! Driver Tiredness campaign, which recommends that tired drivers stop and refuel with two cups of coffee.

Government research shows that falling asleep at the wheel accounts for up to 20 per cent of crashes on motorways and one in ten of all crashes on UK roads.