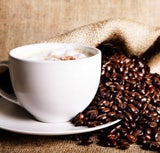 The report from The Local Data Company claims that the six leading coffee chains, including Starbucks, Costa Coffee and Café Nero have increased outlets by 47% in the past year.

According to the report the sector reported 3% total growth which is expected to increase to reach £2bn in consumer spend by 2012.

The report says the growth has been driven by “an influx of newly-redundant businessmen with laptops and Blackberries making use of the cheap, connected space offered by coffee shops”.

It comes despite the varying fortunes of coffee chains in the last 12 months.

During the year, the Coffee republic and BB’s coffee chains went into administration.