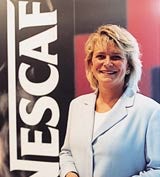 Nestlé says Teare is leaving at the end of the year to return to Sweden because of “changes in family circumstances”.

Teare joined Nestlé two years ago from ICI Paints, where she was marketing director. She oversaw the relaunch of Dulux in the late Nineties, as well as working on the Polycell brand. Teare has also been UK and Ireland marketing director at Tampax manufacturer Tambrands.

She will be replaced by former Coca-Cola and Kimberley-Clark marketer David Glik, who takes up the post on January 1. He moves across from Nestlé’s food and chilled dairy business, where he is commercial director. A restructure resulting from Nestlé’s sale of its ambient foods business means Glik will not be replaced.

Glik will be responsible for a number of brands, including Nescafé Original, Gold Blend, Cappuccino and Coffee Mate. The latter is undergoing a relaunch, backed by a &£1m marketing spend, to persuade consumers to regard Coffee Mate as a “coffee enhancer”, rather than as just a whitener (MW October 17).