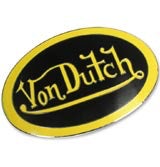 Coca-Cola is launching an energy drink called Von Dutch, named after the fashion label famous in the US for its suggestive ads featuring models smeared in motor oil. It will be aimed at 18- to 35-year-olds.

Von Dutch will be the third energy brand Coca-Cola has added this year, in an attempt to take business away from US market leader Red Bull. Coca-Cola launched Full Throttle in January

Coke will not own the new drink brand but the company’s largest bottler, Coca-Cola Enterprises (CCE), will distribute it and both Coke and CCE will get a share of the profit. The roll-out will initially be for the US market only. However, it is not clear whether the drink will be available in the UK. Von Dutch regular and sugar-free will launch in October in camouflage cans.

Rockstar, which produces the Rockstar and Diet Rockstar energy drinks in the US, will own Von Dutch Energy Drink through a licensing deal with Von Dutch. Coke and CCE have a distribution deal with Rockstar.

As sales of sugary soft drinks struggle, Coca-Cola is playing catch-up in alternative categories, with energy drinks proving a small but highly profitable niche both in the US as well as in the UK markets.

A Coca-Cola US spokesman will not confirm whether Von Dutch will be rolled out into the UK. He says: “For now, we are focusing on the US.”

Advertising remains a hugely important element of marketing, but brands need to engage in a personal dialogue with target consumers if they are to thrive, says Sue Farr On a recent visit to a client in Glasgow, I stumbled across an excellent live brand event that brought together two products in a hilarious manner. The […]

I am writing in reference to the “Sony Ericsson signs up pop band” article (MW August 18). There appears to be a number of inconsistencies in the article that I would like to bring to your attention. Firstly, the article suggests that the Sony Ericsson J300i handset will be branded “Walkman” and be integral in […]

Scepticism about the success of Lawson Muncaster-led City AM, the free London business newspaper that launched earlier this week, is being voiced by press buyers who worry that the newspaper won’t be read by commuters at the end of their journeys. The newspaper is being handed out each morning in the City and Canary Wharf […]