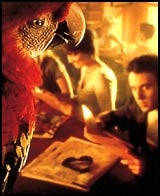 Coca-Cola GB has teamed up with Radio One in a deal where three of its brands will act as headline sponsors of a series of road show and live dance events.

The Coca-Cola brand will sponsor the Radio One “One big Sunday” shows, which have replaced the long-running summer road shows. The afternoon shows are planned for Irvine, Bolton, Middlesbrough, Bournemouth and Plymouth.

Dr Pepper will back the “Moyles on the road” events, which will be held on six consecutive Wednesday afternoons and hosted by Radio One DJ Chris Moyles. And Sprite will support the Radio One “Dance parties” – evening club events which run until the end of the year.

A Radio One spokeswoman says the deals do not include on-air credits but will give the brands full access to the audiences for sampling and promotional purposes.

The move comes as the soft drink giant launches a major sampling drive for its main brand, in which it will give away 1 million glass bottles of Coca-Cola.

The campaign opens in London and will roll out to the rest of the UK during the summer. It features a fleet of red and white vehicles – milk floats, ice-cream vans, jeeps and quad bikes – distributing Coca-Cola at public places, concerts, beach fronts and even on doorsteps.